This article is over 15 years, 6 months old
During the dark years of the 1990s, there were a few signs that new movements of resistance were about to emerge. One of the most important was the formation in France in 1998 of Attac.
Downloading PDF. Please wait...
Saturday 01 July 2006

During the dark years of the 1990s, there were a few signs that new movements of resistance were about to emerge. One of the most important was the formation in France in 1998 of Attac.

Attac’s aim was to campaign against international financial speculation, specifically through the introduction of the Tobin Tax on moving money around the world. Branches of Attac were set up across Europe and the world, particularly after the Seattle protests of November 1999.

Bernard Cassen, the first president of Attac, was one of the main architects of the World Social Forum. Attac activists have also been heavily involved in the European Social Forums (ESF).

Attac must take the credit for spotting far in advance that the European Constitution represented a way of hard-wiring neo-liberalism into the continent’s political and economic structures.

This record is impressive. It is therefore a matter for grave concern that Attac appears to have split.

At the organisation’s annual general meeting (AGM) in Rennes a fortnight ago, two slates were put forward for the administrative council.

One was backed by Cassen and his close ally Jacques Nikonoff, the outgoing Attac president. The other was backed by the economist Susan George and Pierre Khalfa of the left union federation Solidaires.

After the election – which marked a victory for the Cassen-Nikonoff slate – Susan George and her allies declared they were suspending their participation in Attac’s leading bodies on the ground of “anomalies” in the vote count.

Susan George told the paper Libération, “I have been shocked by the sectarian and aggressive atmosphere at the AGM. Those of us supporting a collective leadership have been booed, Nikonoff’s supporters shouted when we spoke and applauded their president wildly.”

This division has been building up for some time. One of the major issues concerns the authoritarian way in which Cassen and Nikonoff have run Attac. Cassen has said that he gave Attac a structure that “may seem undemocratic”, in particular by allowing members to elect only a minority of the administrative council.

Khalfa has said, “We accuse Nikonoff of wanting to turn Attac into a political organisation and of running our movement like a party. We want Attac to be a place of convergence for the forces that are fighting neo-liberal globalisation and not a very hierarchical organisation.”

Roughly speaking the split is a left-right one. Cassen resisted the first ESF in Florence focusing on the war in Iraq and has expressed ambiguous support for a European defence policy. It is those opposed to him who have actively built the social forums and who worked to help organise resistance to neo-liberalism on the ground.

But the split reflects a larger shift. The resistance has won two great victories in France – the defeat of the European Constitution in the referendum of May 2005 and the movement this spring against the CPE law depriving young workers of their rights. Cassen boasted of Attac “spearheading the no campaign against the EU constitutional treaty” and of the “decisive role” played by its local committees.

Attac’s activists certainly deserve credit for their part in the no campaign. But the “decisive role” came from the contribution of political organisations – the Communist Party, the Ligue Communiste Révolutionnaire and those Socialist Party leaders who broke with the party’s official policy of supporting the constitution.

This marks a change in the terrain compared to the late 1990s, when it was non-party movements such as Attac and José Bové’s Confédération Paysanne that had the initiative in orchestrating resistance to neo-liberalism.

The challenge facing both Attac factions – and indeed the radical left in France – is how they can help to develop a political alternative to the mainstream parties that can rise to the level of the campaigns against the constitution and the CPE.

With a presidential election less than a year away, they don’t have much time to get their act together.

Workers’ rights in France and Britain 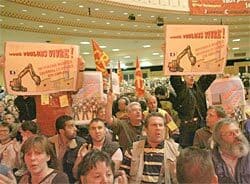