This article is over 15 years, 11 months old
It's barely a year since, at his second inauguration, George Bush proclaimed the commitment of the US to an apparently revolutionary programme of spreading democracy worldwide.
Downloading PDF. Please wait...
Saturday 04 February 2006

It’s barely a year since, at his second inauguration, George Bush proclaimed the commitment of the US to an apparently revolutionary programme of spreading democracy worldwide.

“It is the policy of the US to seek and support the growth of democratic movements and institutions in every nation and culture, with the ultimate goal of ending tyranny in our world,” he said. Bush’s new Secretary of State, Condoleezza Rice, listed the surviving “outposts of tyranny” – Cuba, Burma, North Korea, Iran, Zimbabwe and Belarus – targeted by Washington.

A year on, all these regimes are still in place. And the Palestinian people gave Bush and Rice a sharp slap in the face last week when they voted for Hamas – proclaimed a dastardly terrorist organisation by the US, Israel, the European Union and what have you.

Writhing like a fish on a hook, Bush said this result wasn’t a defeat for his policy. It was the fault of the Palestinian president, Mahmoud Abbas, and of the “old guard” of the ruling party Fatah.

But it was the US that groomed Abbas as a “moderate” and “acceptable” replacement for the “extremist” Yasser Arafat. It is the US that has been pumping money into the Palestinian Authority in a desperate and doomed effort to save Fatah.

As the New York Times pointed out, “The Hamas victory was the fifth case recently of militants winning significant gains in elections. They included the Muslim Brotherhood in Egypt, Hezbollah in Lebanon and a radical Iranian president.”

After 9/11, neo-conservatives like Paul Wolfowitz conjured up a vision of democratic “revolution” in the Middle East. They argued that the spread of democracy would install pro-Western liberal capitalist regimes throughout the region.

The trouble with this scenario is that the US is identified with the two most hated features of the status quo in the Middle East – the existing tyrannical regimes and Israel. So when people get a chance to vote they back candidates who they see as challenging this state of affairs.

This contradiction – that spreading democracy actually undermines US interests – puts Washington in a terrible pickle when their favoured “outposts of tyranny” come under challenge.

Ayman Nour, a pro-Western Egyptian liberal, mounted an unsuccessful but spirited challenge to president Hosni Mubarak in last year’s rigged elections. On Christmas Eve he was sentenced to five years in gaol for election fraud. The White House whined that it was “deeply troubled” by this judgement, but it can’t afford to break with Mubarak.

Even more striking is the case of Islam Karimov, the dictator of Uzbekistan, who became a key Western ally after 9/11 because he could provide badly needed airbases in central Asia.

In May last year Karimov’s security forces mowed down hundreds of opposition protesters. The US felt obliged to utter some mild criticisms. Karimov reacted by kicking the Americans out of Uzbekistan. He felt strong enough to do this because he could count on the support of the two big neighbouring powers, China and Russia.

What will happen as a result of Hamas’s victory is anybody’s guess. All the pompous editorialising won’t change the fact that it is the US and its client Israel that drive people to armed resistance.

But whatever happens is unlikely to remove the fatal contradiction in Bush’s programme of democratic imperialism. One response is to redefine what “democracy” means. Thus Philip Bobbit, a particularly pompous American Democratic Party pundit, was explaining the other day on Radio 4 that democracy isn’t so much about voting as the rule of law, respect for individual rights and private property, and so on.

Fareed Zakaria of Newsweek wrote a book a couple of years ago in which he argued that the US was trying to spread “constitutional liberalism”, by which he meant the political framework needed for free market capitalism to flourish. Zakaria warned against the dangers of “illiberal democracy”, citing the cases of Iran and of Hugo Chavez of Venezuela. I suspect we’ll be hearing a lot more in a similar vein. 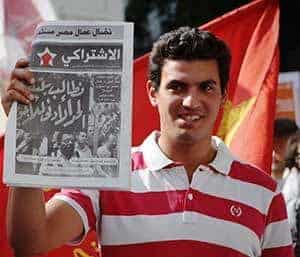