Donald Trump – the war president will crash into reality

Missiles in Syria, a mega-bomb in Afghanistan, a potential nuclear confrontation in Korea—what happened to the Donald Trump who ran as a critic of US foreign wars?

Scholars have long argued over whether a state’s foreign policy is driven primarily by domestic politics or by its relations with other states. In this case, I’m pretty sure it’s domestic politics in the saddle.

Trump’s presidency had a very bad start. His Muslim entry ban stalled twice in the courts. Ultra-conservative Republicans in Congress blocked his attempt to replace Barack Obama’s healthcare programme. The White House has been paralysed by in-fighting.

Stephen Bannon, Trump’s racist populist “chief strategist”, is taking the fall for this. He has been demoted and publicly rebuked by Trump.

But, according to the Washington Post newspaper, “For Trump, one bright spot was the decision to launch 59 missiles in Syria … The president was pleased with the process, overseen by national security adviser HR McMaster, that brought together his war cabinet and corralled its expertise in a way that resembled a more traditional White House.”

Presidential crony Thomas J Barrack told the Post, “He’s in the best place that I’ve seen him since the inauguration. He’s confident. He thinks he’s found the groove. And I think he now feels the commander in chief role.”

Trump underlined this, telling the press on Thursday last week, “What I do is I authorise my military. We have the greatest military in the world, and they’ve done the job, as usual.

“We have given them total authorisation, and that’s what they’re doing.”

He was explaining why he had authorised the use of the MOAB bomb in Afghanistan. Foreign Policy magazine commented, “Under Trump, the White House has allowed commanders on the ground far more leeway in striking targets in Afghanistan, Iraq and Syria, a welcome change for military leaders who long bristled at the control the Obama administration exercised over small troop movements and sometimes individual targets.”

Trump may be enjoying playing at being a war president, but he is still hemmed in by the realities of external politics.

The mega-bomb was dropped in frustration that, after 16 years of war, the US and its Afghan client regime haven’t defeated the Taliban and its allies.

After the cruise missile attack on Syria, the Trump administration has backed away from committing itself to using force to remove the regime of Bashar al-Assad.

This is probably because Trump’s generals—headed by McMaster and defence secretary James Mattis—know that if the US attempted this, it would lose just as it did in Vietnam and Iraq and is currently losing in Afghanistan.

Korea is an even bigger problem.

The North Korean regime has sought to compensate for geopolitical isolation and economic weakness by developing nuclear weapons and the ballistic missiles to deliver them.

Successive US presidents have pledged to prevent North Korea acquiring the capability to mount a nuclear attack on the continental US.

If it came to a war, the US and its South Korean ally would almost certainly win—but at a very high cost.

North Korea has a huge number of missiles and artillery targeted at the South Korean capital Seoul, a world city with a population of 25 million just across the border.

There’s also the problem of China, which remains North Korea’s main, though increasingly reluctant, backer. Trump has been pressuring China to rein in the North Korean leader, Kim Jong-un, by threatening that otherwise he will act pre-emptively.

China is talking about reducing North Korea’s oil supply, but it’s doubtful if it would sit by while the US took Kim out.

Trump may feel on top of the world when he sits with his generals. Other presidents have felt the same. George W Bush called himself “the decider”. But he led the US into the worst military defeat in its history.

Trump too will discover the limits of US power. 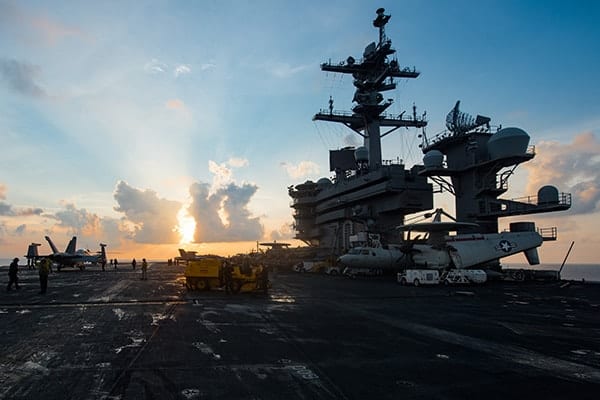