Kurds are trapped by imperial schemes

The Ankara bombings underlined that the troubled relationship between the Kurds and the Turkish state is close to the heart of the rapidly deteriorating crisis in the Middle East.

The Kurds were one of the main losers in the imperialist carve-up of the Ottoman Empire at the end of the First World War. They were denied the right to self-determination and distributed between Iran, Iraq, Syria, and Turkey.

The significance of the Kurds in Turkey is partly a consequence of their social weight. The CIA World Factbook estimates them at 18 percent of the population, with between two and four million living in Istanbul.

But it is also the result of the stubborn armed struggle waged since the mid-1980s by the Kurdish Workers Party (PKK) in southeast Anatolia, where the Kurds have traditionally been concentrated.

After the victory of the Islamist AKP under Recep Tayyip Erdogan in 2003 the Turkish government and the PKK were for a long time inching, painfully slowly, towards a peace deal. Under this Kurdistan would get a degree of autonomy and Kurdish language and culture would no longer be persecuted.

In the last year or so, the peace process has been in increasing trouble, for two reasons. First of all, the regime of Bashar al-Assad abandoned the Kurdish areas over the border in Syria and the PKK’s Syrian affiliate took control of them. Assad probably intended to cause problems for Erdogan, who might want to come to terms with the PKK but not at the price of seeing its influence spread.

Secondly, the PKK-aligned Democratic People’s Party (HDP) won 13.12 percent of the vote in the Turkish general election last June. This was enough to deny the AKP a parliamentary majority.

Worse still from Erdogan’s point of view, the result prevents the AKP from changing the constitution to give the presidency—which he now occupies—executive powers.

The result is increasing antagonism between the Turkish state and the Kurdish people. The ceasefire between the army and the PKK has broken down, and in re-run parliamentary elections Erdogan is beating the drum of Turkish nationalism.

This is terrible news for the Kurds, but it’s also complicating life for the Western imperialist powers.

In the first place, there’s a divergence in aims over Syria. Erdogan, like the rulers of Saudi Arabia and Qatar, is going all out to overthrow Assad, in the process advising and funding various jihadi groups in Syria.

The US still says it wants to get rid of Assad, but is more worried about Isis. The Kurdish fighters in Syria have proved to be the most effective military ally the US has found against Isis. So when Turkey’s warplanes started targeting them in the summer, its Western Nato allies complained.

The European refugee crisis is another complicating factor. Turkey’s application for membership of the European Union had been dead in the water for years. Ostensibly this was because of Erdogan’s recent authoritarian turn.

The real reason was racist opposition in member states such as France, Germany, and Austria to 80 million Muslims becoming EU citizens.

Now Turkey has received over two million Syrian refugees. The EU leaders hope that Erdogan can stem the flow via Turkey into Europe. But he’s made it clear that this won’t come cheap.

A summit last week promised an EU “action plan”—a £2.2 billion subsidy, visa-free travel in Europe for Turkish citizens, and a revival of talks on Turkey’s accession to the EU. One official said, “I have never seen the EU so forthcoming to Turkey, never…It is like Santa Claus has arrived.”

The Financial Times reported that Brussels has suppressed a report criticising Erdogan’s human rights record until after the elections in November.

The irony is that the EU shunned Turkey when Erdogan was at his most liberal. It is now falling over itself to appease him when he seems hellbent on reviving the war with the Kurdish people. As they were a century ago, the Kurds look like being the victims of manoeuvres between the imperialist powers and the local ruling classes. 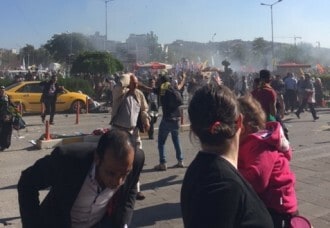 Peace was bombed in Turkey - eyewitness report from Ankara 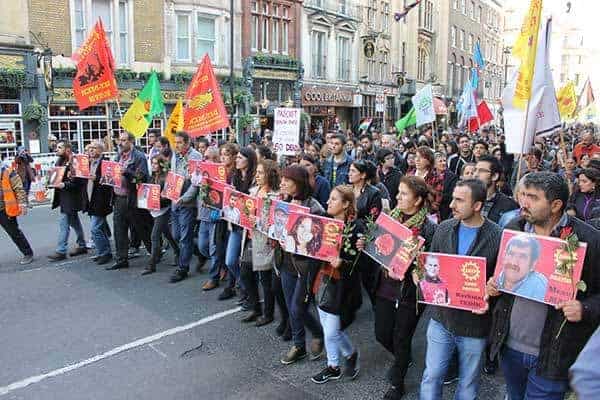 Fury in Turkey after bombing