Thatcher shows up problems for Labour

When asked about her greatest achievement, Margaret Thatcher famously replied, “Tony Blair and New Labour”. So it’s quite appropriate that, as one monster is laid to rest, the other should suddenly surface.

Last week Blair made his biggest intervention in British politics since he was finally forced out of 10 Downing Street in 2007. He published an article in the New Statesman condemning Labour under Ed Miliband for retreating into its “comfort zone” of campaigning against the Conservative-Liberal coalition’s welfare cuts.

“This scenario is more menacing [for Labour] than it seems. The ease with which it can settle back into its old territory of defending the status quo, allying itself, even anchoring itself, to the interests that will passionately and often justly oppose what the government is doing, is so apparently rewarding, that the exercise of political will lies not in going there, but in resisting the temptation to go there.”

Some of Blair’s former cabinet ministers rushed in to back him up. Peter Mandelson said “there are major structural challenges and choices facing Britain and Labour must consider the difficult changes and reforms needed to address them.”

Alan Milburn declared, “The closer the election comes, people will stop asking Labour what it is against. They will want to know what Labour is for and what, if elected, it would do. Tony Blair is right to argue that the sooner that process begins in earnest, the better.” John Reid and Tessa Jowell have also weighed in.

All this is rich coming from a war criminal and a bunch of discredited has-beens. All the same, Blair and his cronies are pointing to a real contradiction in Miliband’s leadership of the Labour Party.

Blair is Thatcher’s child in two respects. First, without the defeats she inflicted on the organised working class in Britain, it is highly unlikely he would have become Labour leader.

Secondly, Thatcher restructured British society along neoliberal lines. Blair not only left this “revolution” in place, but sought to radicalise.

He was too weak and incompetent a domestic prime minister to achieve this, but he laid the foundations for the coalition’s attempt to bed neoliberalism down even deeper. And his ally and antagonist Gordon Brown increased British capitalism’s dependence on the financial bubbles blown up by the City of London.

Miliband has tried to distance himself from the Blair-Brown legacy—but not too much. He condemned the greatest crime they committed—the invasion of Iraq—but hasn’t opposed Britain’s role in occupying Afghanistan.

He and his shadow chancellor Ed Balls denounce the coalition’s austerity programme, but they insist that a Labour government would cut public spending as well.

Above all, Miliband has not broken with neoliberalism. You could see the tightrope he walks in his House of Commons tribute to Thatcher last week.

Thus, while condemning her policies towards mining communities, LGBT people and Nelson Mandela, he said “she was right to recognise our economy needed to change” and to shrink the state.

Blair shrewdly points to the incoherence of Labour policy under Miliband, arguing it was wrong to “tack right on immigration and Europe, and tack left on tax and spending”. In fact, Miliband isn’t tacking very far to the left economically, but he’s certainly, like David Cameron, trying to curry favour with voters attracted to Ukip.

Blair’s intervention comes at a delicate moment for Miliband. Labour is ahead in the opinion polls, but its leaders fear that this could melt away in the run-up to the general election in 2015. The Blairites’ answer—to return to their “modern vision”—is no solution. It was their embrace of bubble-driven capitalism that got us into the present mess.

The most important lesson from all this is that we can’t rely on a Labour victory to end austerity. Such a victory isn’t certain and because a Miliband government would keep austerity. That’s why it’s so important to build the struggles that are developing, most notably against the bedroom tax. It’s here that the real potential for change lies. 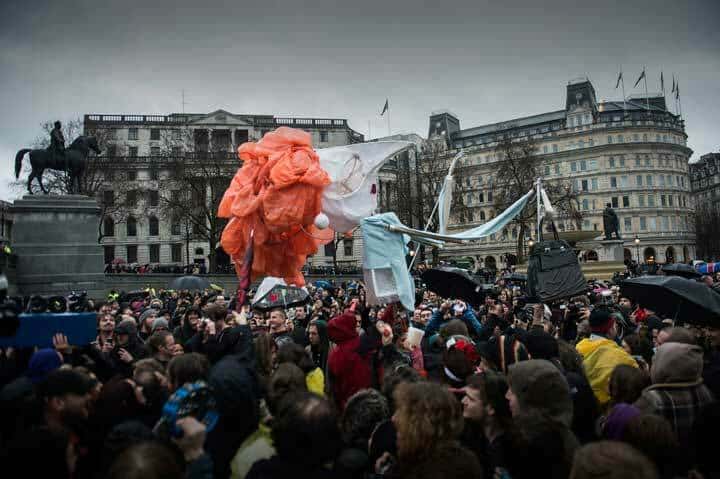