Fukuyama was already famous. In 1989, while deputy director of policy planning at the State Department under President George HW Bush, he published an article called “The End of History?”

He argued that the victory of the US over Stalinist Russia in the Cold War marked the definitive triumph of liberal capitalism over Communism. It was therefore the end of history.

Fukuyama understood history, following the great philosopher GWF Hegel, as the struggle between rival ideologies. Communism, he contended, represented the last progressive set of ideas capable of challenging capitalism. Therefore, once it had failed, history was over.

Fukuyama was seen as the spokesperson of the capitalist triumphalism expounded by US president Ronald Reagan and Margaret Thatcher.

This was never entirely fair. In a famous passage Fukuyama mused, “The end of history will be a very sad time,” dominated by “economic calculation, the endless solving of technical problems, environmental concerns, and the satisfaction of sophisticated consumer demands.”

But in the book where he elaborated the argument, the revolutionary Karl Marx was treated as a dead dog.

In 1992 I debated with Fukuyama about his book at in Manchester. Nobody in the 200-strong audience was prepared to support him, leading him grudgingly to concede, “I guess history isn’t over in Manchester yet.”

In the succeeding decades, history has proved itself stubbornly alive everywhere. And Fukuyama has changed his tune about Marx. Back in 1989 he wrote, “Surely, the class issue has actually been successfully resolved in the West.

“The egalitarianism of modern America represents the essential achievement of the classless society envisioned by Marx.”

By 2016, Fukuyama was having second thoughts. Trying to explain Donald Trump’s election, he wrote in the Financial Times newspaper that social class “appears to have become the single most important social fracture in countless industrialised and emerging-market countries”.

In an interview with the New Statesman magazine to promote his latest book, Fukuyama went still further.

“At this juncture, it seems to me that certain things Karl Marx said are turning out to be true,” he said.

“He talked about the crisis of overproduction… that workers would be impoverished and there would be insufficient demand.”

But Fukuyama is still sticking to the basic framework of his original article. He argues that history is driven by what Hegel calls “the struggle for recognition”. This finds expression not just in ideological struggle, but also in contemporary identity politics.

Although misunderstanding Hegel in various ways, Fukuyama makes the same mistake of treating ideas as decisive.

Marx said this failed to take into account how societies are shaped by the structure of economic relations and the productive technologies with which these are interwoven.

Fukuyama understands politics superficially as ideological shifts and power struggles. Back in 1989 he felt entitled to ignore Marx because the regimes that—falsely—claimed legitimacy from his ideas had collapsed.

The past three decades have been a painful education in the persisting importance of Marx’s critique of capitalism as an economic system defined by class exploitation and cyclical crises.

But Fukuyama lags behind, tacking bits of Marx onto a basically unchanging theoretical framework.

He focuses on identity politics, without acknowledging sufficiently the way the suffering caused by the neoliberalism he once celebrated encourages some people, for example, to blame migrants.

Those who want to understand contemporary history are better off starting with Marx.

Blairites back war in Syria to take aim at Jeremy Corbyn 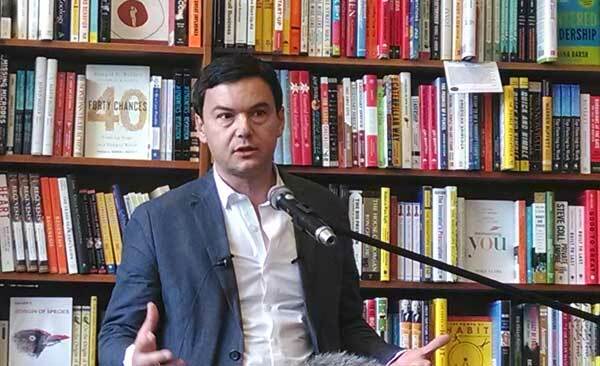