Tory chancellor George Osborne has said leaving the European Union (EU) would lead to recession in Britain. He claimed a Leave vote would provoke an “immediate and profound” economic shock and that 820,000 jobs could go within two years.

Of course, economic forecasts from the Treasury are hardly reliable. And Osborne, whose government has slashed more jobs than this since 2010, doesn’t care about unemployment.

But the Tories often use the threat of economic disaster to protect their interests.

Scots were told during the independence referendum that voting to leave Britain would spark economic chaos.

And workers are often told they will lose their jobs if they fight over wages and conditions, as bosses will shut sites.

It’s true that some bosses could try to punish Britain if people vote to leave the EU. They could move money elsewhere, or cut back on investment in Britain.

But they are unlikely to do so if it would harm their profits. And if we followed this argument we would never demand anything for fear of upsetting the rich.

Britain could enter recession again this year because of real problems in the economy, such as a reliance on debt and credit.

This has nothing to do with the EU. 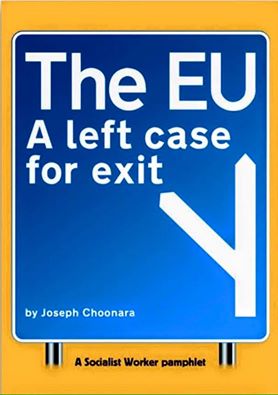 The so-called PIGS—Portugal, Ireland, Greece and Spain—are all in the EU and have all experienced deep recessions.

Greece’s GDP has dropped by a quarter since the 2007-08 financial crash. Unemployment stands at around 24 percent—rising to 50 percent for young people.

Far from the EU easing the pain, it has contributed to it—and then demanded more.

Workers in Greece have been repeatedly told that if they just swallow the next austerity package, the economy will improve.

It hasn’t. The situation in Greece has exposed how the EU and its institutions are thoroughly capitalist and neoliberal. They act in the bosses’ interests, not ours.

Osborne and EU leaders have the same concerns in common—“productivity” and profits.

Like most of the ruling class, Osborne thinks being in the EU is best for Britain’s rich.

And he claims that what’s good for the bosses is good for us. But it isn’t true.

The bosses will try and squeeze more out of us for less whether we’re in recession or not.

Economic crisis is part and parcel of capitalism. But we can shape whether bosses get away with making us pay the price for it.

Greece could have broken with the EU and refused to sign up to austerity. It could have defaulted on the debt and nationalised the banks. But this would have required a much higher level of struggle.

The level of struggle in Britain has been nowhere near what is needed to stop the Tory onslaught. But they aren’t as strong as they may appear.

Most of Britain’s ruling class backs EU membership, but our rulers are divided over it. We should exploit those divisions.

The bosses and the Tories want us to pay for the crisis. Breaking up the EU would weaken them—let’s grab the opportunity.