As left wing figures claim that bringing down immigration is a working class question, Dave Sewell argues the choice is between workers uniting or turning on one another

Unite union leader Len McCluskey even dared cite the revolutionary Karl Marx to back up his argument.

“Let’s have no doubt—the free movement of labour is a class question,” McCluskey wrote in the Morning Star newspaper.

“Karl Marx identified that fact a long time ago.

“‘A study of the struggle waged by the British working class,’ he wrote in 1867, ‘reveals that in order to oppose their workers, the employers either bring in workers from abroad or else transfer manufacture to countries where there is a cheap labour force’.”

It is a class question—of whether workers unite or turn on one another.

This isn’t the first time McCluskey has cited this misquote from an article Marx didn’t write. He used to include its next sentence, concluding that “given this state of affairs” workers’ organisations “must become international”.

Unlike Marx, McCluskey now calls for the national state to restrict the rights of workers abroad. His argument can sound like common sense but it is dangerously wrong.

McCluskey argued “If all you have to sell is your capacity to work, then its value is going to be affected by an influx of people willing to work for less money and put up with a lower standard of living.

“Supply and demand affects the sale of labour too, pitting worker against worker.”

This chimes with many low-paid workers’ experience. Bosses and agencies tell anyone who complains about pay and conditions that migrants are ready to take the job.

It’s in bosses’ interest to emphasise this “race to the bottom”. While it’s a real phenomenon, attempts to explain it in terms of immigration are wrong.

After 2000 there was both an increase in immigration from eastern Europe and attacks on workers’ living standards.

But the two aren’t linked. Real wages fell after the 2008 global crash—when net migration was slumping.

It’s true that “supply and demand” affects the fluctuations in any commodity’s price. That includes wages, the price of workers’ labour power. But that’s only half the story.

McCluskey’s argument assumes capitalism always needs the same amount of labour. If this were true then more workers could mean lower wages.

But a capitalist economy is driven to expand.

The number of jobs never stays fixed—it mostly goes up in between crises—and during crises it goes down.

To manage these changes profitably, bosses need what became known in the 1830s as a “reserve army of labour”. This is a mass of potential workers excluded from working.

Bosses can hire them quickly during the boom times, or try to make them compete with other workers and drive down wages during the bad times.

Marx’s ally Frederick Engels called this “the worst side of the present state of things in terms of its effect on the worker”.

He said it was “the sharpest weapon” of the bosses in his book The Condition of the Working Class in England in 1844.

If any refused to accept the bosses’ terms “another is easily found in his place”.

Marx built on this in his masterwork Capital. He described how capitalism was the first system that had created a situation of “too many” workers.

He wrote that “a surplus labouring population is a necessary product of the development of wealth on a capitalist basis” and a “condition of existence of the capitalist mode of production.

Engels looked—in sometimes regrettable terms—at the presence of poor Irish immigrants. He wrote, “The rapid extension of English industry could not have taken place” without this “reserve at command.”

But the two most important sources for new workers were peasants driven from the land and a level of population growth made possible by capitalist production.

So he also described how capitalism creates unemployment independently of immigration. When profits take off in a certain sector, bosses draw more people into the workforce so it can expand.

But profits can’t keep up with the expansion of production. When a crisis hits, bosses will often lay off these workers.

Marx showed that even when capitalism was expanding, bosses would lay off some workers.

To maintain their profits bosses invest in increasing productivity, for instance by buying more efficient machinery. This makes some workers surplus to requirements.

This means people can survive on lower wages—and be hired to do work that previously would have cost too much to be profitable.

So the workforce as a whole can expand even as some workers are sacked. Apologists for capitalism claim that those sacked can simply find new jobs elsewhere.

But the possibility to do this is limited, even outside general economic crises where new jobs are scarce.

Newly redundant workers, often with skills and experiences from shrinking

industries, can be less attractive to bosses than new, inexperienced workers they can pay less.

Again, it is in the bosses’ interest to exaggerate this. Often bosses avoid getting rid of highly-skilled workers, even during recessions.

But it does mean that even when the system is short of workers, it banishes thousands to the scrapheap of unemployment.

For the ruling class, the reserve army of labour presents a problem. They want to keep enough people strong enough to be ready for work, but desperate enough to take it.

Engels described such tensions over the Poor Laws in the 1800s. The same arguments shape today’s cruel welfare reforms. It’s not about helping people find work but driving them to compete for it.

Excluding more migrants from claiming benefits would only sharpen that desperation.

For the working class, the question is one of unity. Do those with jobs fight to lock out those who might be used to undercut them—or to organise alongside them?

London bus workers from across the world unite on the picket line during the same year (Pic: Guy Smallman)

Marx answered by urging workers to “organise a regular cooperation between employed and unemployed in order to destroy or weaken the ruinous effects of this law of capitalistic production on their class”.

A superficial look at figures can make the reserve army seem bigger than it is. Many workers, migrant or not, soon become integral to the workforce.

The NHS and many private firms would collapse if all migrant workers were laid off.

When women began to enter the workplace, many bosses hired them because they could pay them less. Shamefully, some trade unionists argued for keeping them out to protect men’s wages.

Yet today only the worst reactionaries argue against women workers, who are now an essential part of both the bosses’ economy and the workers’ movement.

Those people who are underemployed—working fewer hours than they want to—and the under-25s who have a lower minimum wage, can be seen as a threat to wages.

Yet no serious trade unionist calls for excluding them.

The fight is to win them better rights.

To argue that it’s different when it comes to migrants only reinforces myths that help the bosses.

Karl Marx identified that fact a long time ago. “The ordinary English worker hates the Irish worker as a competitor,” he wrote in 1870. “This antagonism is kept alive and intensified by the press, the pulpit, the comic papers—in short by all the means at the disposal to the ruling class.”

He called it “the secret by which the capitalist class maintains its power”.

Overcoming that power is the real class question.

Those migrants who do work for lower wages don’t do so out of choice. 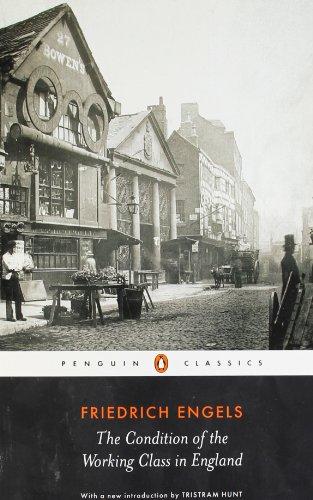 The Condition of the Working Class in England
Frederick Engels, £10.99

Immigration—The Myths Spread to Divide Us
by Charlie Kimber, £2

Available at Bookmarks, the socialist bookshop.
Phone 020 7637 1848 or go to bookmarksbookshop.co.uk