Workers across Greece were set to walk out in a general strike on Wednesday—against more austerity that a radical left government was elected to end two years ago.

Adults in the Room, a new book by the then finance minister, Yanis Varoufakis, seeks to explain how it failed.

The institutions of the European Union (EU) used “bailouts” of Greece to extort devastating cuts, privatisations and attacks on workers’ rights.

Varoufakis was brought into the world of shadowy meetings where unaccountable bureaucrats overturn the policies of elected governments and ruin countless lives.

After failing to change them, he turned whistleblower and exposed them.

Along the way, his book also unwittingly exposes the limitations of his own strategy for taking them on.

Varoufakis lays bare the hypocrisy of a bailout regime presented as a generous “rescue” of the Greeks.

French and German banks lent money to Greek banks that then went bust after the 2008-9 financial crisis. The EU and the International Monetary Fund (IMF) handed the Greek government a bill it couldn’t pay.

Bankrupt Greece was granted the biggest loan in history—on condition of brutal austerity that shrank its economy.

This “cruel and unusual punishment,” Varoufakis writes, “effectively condemned Greece to a modern version of the Dickensian debtors’ prison.”

Ordinary people in Greece fought hard and elected radical left party Syriza to break that cycle. Varoufakis wanted to convince the creditors that it was in their interest too.

Crush Greece and you’ll never get your money back, he argued. Help us now, and eventually you will.

He was prepared for a hostile reception. Instead “they denied the very existence of the pieces of paper I had placed before them.”

Europe’s most powerful officials protested that their hands were tied by rules beyond their control.

Yet it didn’t stop him closing the Greek banks on the eve of a key referendum.

At centre stage is the eurogroup—a body with no official existence, informally bringing together elected finance ministers. Yet its meetings are introduced by unelected officials, their decisions “presented as a natural, apolitical consequence of bureaucratic constraints”.

Dealing with this regime of “creditors who don’t want their money back” reads like a Franz Kafka novel.

They bitterly opposed rehiring sacked cleaners, even though Varoufakis cancelled out the cost by selling his ministry’s luxury cars.

Greece experienced collectively the same treatment that Britain’s poor receive when they claim their benefits at job centres, where they must consent to their humiliation by espousing ‘affirmation’ phrases such as ‘My only limitations are the ones I set for myself.’

Should the government default on much-needed pensions and benefits or a debt payment to the IMF?

“For Klaus it was a no-brainer. ‘You must never, ever default to the IMF. Suspend all pension payments instead.’”

Varoufakis recognises that their bloody-minded hostility to the “Greek spring” is about more than Greece.

The aim is to make Greece an example to “discipline” other countries into Greek-style austerity.

Like the debtors’ prisons to which he compares the bailout, the point is to terrorise the rest.

After Syriza leader and prime minister Alexis Tsipras surrendered, the Greek parliament had to approve a statement saying that it requested the new attacks.

Varoufakis writes, “Greece experienced collectively the same treatment that Britain’s poor receive when they claim their benefits at job centres, where they must consent to their humiliation by espousing ‘affirmation’ phrases such as ‘My only limitations are the ones I set for myself.’”

For Varoufakis, such cruel arrogance by the “liberal establishment” is to blame for its recent polling defeats.

His account is particularly damning for social democrats, the Labour-type parties that promise reforms for the working class then govern for its enemies.

Italian finance minister Pier Carlo Padoan urged Varoufakis to do as he did—pacify Schauble by rolling back workers’ rights despite the political cost.

French finance minister Michel Sapin agreed with Varoufakis in private but never in public or practice.

It’s these betrayals, not left wingers such as Jeremy Corbyn, that explain “the general Waterloo now facing European social democracy”.

Syriza was meant to change all that.

In the book Tsipris constantly appears more interested in balancing agendas than finding a coherent plan.

He made fatal compromises with his enemies, and haggled futilely over the content of the EU’s plan rather than addressing the power that allows them to dictate it.

An exasperated Varoufakis compares this to “trying to fend off a shark by pouring blood in the sea”.

At times Syriza comes across as positively cynical.

Party chiefs told Varoufakis its pre-election “Thessaloniki programme” of reforms was never meant to be carried out. When the government called a referendum on the EU’s proposals, their aim was to lose to justify their surrender—instead austerity was rejected.

But Varoufakis has a lot of sympathy for Tsipras. The two of them were “in office but not in power”.

Every left government finds the key structures of the state and the economy in the hands of its enemies.

Varoufakis sees his antagonists as playing a Shakespearean tragedy—led to their doom by a fatal flaw.

He never stops believing in a solution that will work for everyone.

He sees himself as fighting for “common sense” against “continental-scale irrationality”.

But capitalism cannot get out of crisis without making the working class pay. EU austerity is based on the interests of the ruling class.

But in his own way Varoufakis was—and still is—just as trapped by the logic of trying to “fix” capitalism on its own terms.

Encouraging a Chinese firm to buy up state ports and railways cut him off from dockers striking against privatisation.

He repeatedly ruled out imposing capital controls as against the spirit of the eurozone. This was as misguided as his recent campaigning against Brexit.

The referendum brought a reminder of the strength of the Greek working class. Workers defied expectations and delivered a tremendous vote against austerity. 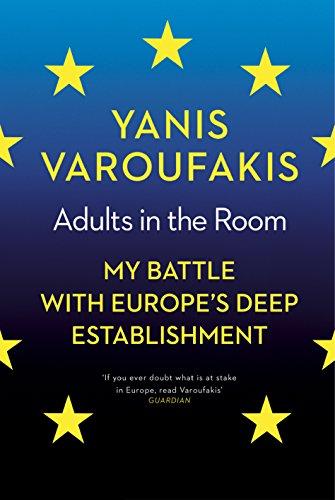 Varoufakis writes that at the rally for a “no” vote, “the crowd’s energy exploded”. “A sea of five hundred thousand bodies” became “a single body of people who had simply had enough”.

One man told him “Resistance is NEVER futile”, as “distinct struggles” came together in “one gigantic celebration”.

But Varoufakis cannot see the potential in that collective defiance to defeat the loan sharks and the system they enforce.

Varoufakis’s opponents have a plan to crush working class strength.

Despite noble intentions, his reformist vision of change fatally squanders this.

The only real solution is to use working class power for revolutionary change.