Politicians across the spectrum, from the Tories to Labour, accept the myth that migrants are to blame for lower wages. But striking migrant workers at the London School of Economics told Alistair Farrow how they’re pushing wages up

Virtually all politicians and pundits agreed during the general election campaign that immigration drives down workers’ wages.

But there is no evidence that immigration has a negative impact on wages and services (see below).

A fight by migrant cleaners at the London School of Economics (LSE) is a powerful antidote to that myth.

Kinkena, one of the cleaners, argued that the Tories and bosses were to blame for low wages. “Migrants don’t bring wages down,” he told Socialist Worker.

“The Labour Party promised to increase the minimum wage to £10 an hour.

“How would that be possible if migrants bring wages down? It’s a political decision.”

The outsourced cleaners are striking for the same maternity, paternity and sick pay as workers directly employed by the LSE.

They are proving that workers fighting, wherever they happen to come from, can push pay up for everyone. Their walkout has already forced LSE bosses to come back with a better offer, but workers are fighting on.

We face racism every day, but we are fighting against it as hard as we can. We’re not going to hide behind doors any more’—Mildred Striking LSE cleaner (Pic: Socialist Worker)

Bosses want workers to be divided so they can keep pay down, and this racist scapegoating affects the way people are treated at work.

Daniel, one of the LSE strikers, told Socialist Worker, “As a migrant you can be more vulnerable.

“People come to work when they’re sick because they’re scared of losing their job.”

Mildred added, “We face racism every day, but we are fighting against it as hard as we can.

“We‘re not going to hide behind closed doors anymore—this strike is about making the bosses see we’re not taking it.

“When you come down to the picket it’s about speaking your mind so the world can hear you.”

Racist immigration rules often mean that migrants can’t do jobs in Britain which they were qualified to do in other countries.

As Alba told Socialist Worker, “In Ecuador I was an accountant, but when I came here I had to do nanny jobs.

“I was a single mother with three children—it was very hard.”

Migrants have always been part of the working class in Britain, and have strengthened workers’ ability to fight against the bosses.

The idea that migrants flood the labour market is false.Workers tend to move to another country only when there are more jobs available.

David, another worker, told Socialist Worker, “Our parents came to this country and made it what it is.

“Everyone should have the right to go to any country.”

‘In Ecuador I was an accountant, but when I came here I had to do nanny jobs’—Alba Striking LSE cleaner (Pic: Socialist Worker)

Alba added, “We all come from different countries and each have our own reasons, but we all have the same needs.

“We want to be treated with dignity and respect.”

The workers at LSE have shown fighting works—a lesson the leadership of the trade union movement should learn.

Office for National Statistics figures show that trade union membership dropped by 4.2 percent in 2016—the sharpest drop in membership since records began.

“The recent growth in private sector employment has been characterised by a large proportion of insecure jobs,” she said.

But trade unions need to organise workers in “insecure jobs” many of whom are migrant workers. Unfortunately some union leaders have also bought into the Tories and bosses’ myths on immigration (see below).

Those sort of comments open the door to arguments in favour of limiting the number of migrants. This is a weapon in the hands of the bosses, but to beat their attacks the working class movement needs unity—not more divisions.

As striker Oliver told Socialist Worker, “If we come together as migrant workers we can fight against the way we’re treated.”

Bosses, not workers, drive down our pay

Migrant workers were central to a number of pay campaigns over the past year—in hospitals, cinemas, warehouses and an oil refinery.

This hasn’t stopped politicians insisting that migrants undercut wages, but repeating it doesn’t make it true.

Bosses pay workers as little as they can get away with.

It can seem obvious that immigration reduces this through “supply and demand”. If more workers sell their labour power, surely they get a lower price.

The number of jobs isn’t fixed. The economy expands and contracts, as do individual firms.

The labour market has what bosses call “rigidities”. Workers with certain skills or experiences can be difficult to replace, increasing their bargaining power to demand higher wages.

Wages are set through struggle, and workers’ organisation and militancy plays a key role.

Politicians from racist Nigel Farage to left wing Jeremy Corbyn point to construction as an example of migrants driving down wages.

Public sector pay has been held down since 2008. That’s not down to supply and demand, but the government’s pay freeze. Because the public sector is such a huge employer, this lowers the bar for everyone.

Study after study has looked for evidence that migrants drive down pay—and not found it.

The London School of Economics’ (LSE) Centre for Economic Performance last year found that “the areas of the UK with large increases in EU immigration did not suffer greater falls in the jobs and pay of UK­?born workers.”

A 2013 study by researchers at University College London even found that immigration produced a tiny increase in average wages.

To get around this politicians cherry-pick the most ambiguous data—about the lowest paid. 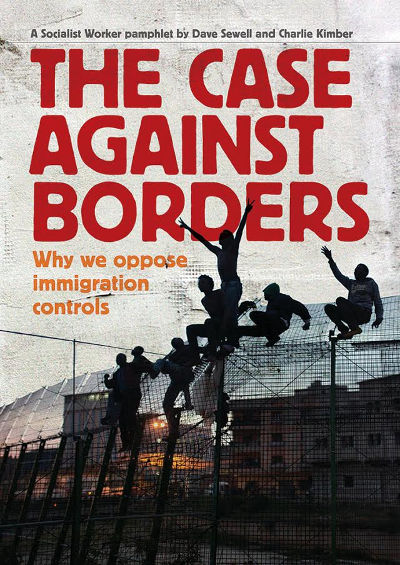 But they don’t mention that many of these workers are themselves recent or temporary migrants.

Yet even in this category the figures don’t stack up. A study by LSE researchers in 2015 found no correlation between immigration and low wages for unskilled workers.

Those studies that found negative effects showed them to be tiny—far smaller than the costs of inflation and austerity. And they only point to a weak correlation, they don’t prove causes falls in wages.

Immigration controls are a class issue.

By repressing and dividing workers, they give bosses an extra weapon. The unspeakable truth is that open borders would help workers fight for higher pay.