Bitter cops on the march show no interest in unity

This article is over 10 years, 1 months old
There were 30,000 cops and one Socialist Worker journalist. The march against police cuts on Thursday of last week wasn’t pleasant.
By Simon Basketter
Downloading PDF. Please wait...
Tuesday 15 May 2012

There were 30,000 cops and one Socialist Worker journalist. The march against police cuts on Thursday of last week wasn’t pleasant.

They had been warned not to get caught by infiltrators trying to get them to speak out of turn.

But when they did talk it was clear the cops were angry and bitter.

One said, “You expect the Tories to support us. I always vote Tory but this isn’t fair.”

The theme of their campaign—with pictures of threatening burglars or rioters on the rampage as the consequence of cuts—is nasty, but hugely popular with the cops.

Trucks carrying the posters were cheered with one of the rare outbursts of enthusiasm on the day.

The other was tens of thousands of cops cheering an actor from the cop show The Bill.

They marched for the most part in silence. The ominous sea of baseball caps made up for the lack of uniform.

As they passed the Home Office there was some booing. But the half hearted failure to get up a chant suggests they haven’t been paying attention on proper protests.

Although some people applauded the demo as it passed parliament, the cops showed no interest in uniting with workers.

It wasn’t just that they were contemptuous of the public sector strike.

They were entirely disinterested.

They believe they are a special, separate case.One cop said, “There have to be cuts, but we are the last line of defence.”

A brave man walked through the crowd with a banner offering a reward for information about police corruption.

He was jostled and insulted to much hilarity.

Some cops laughed when protesters at the side of the march chanted the names of people who have died in police custody.

At the end of the trudge through London, a steward said, “That’s it, we’re done”. And they dispersed.

They were only following orders. 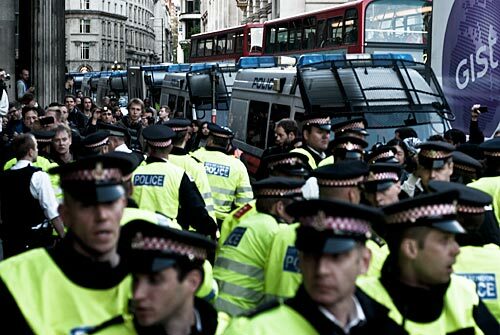 IPCC: is it time to put down the police's pet watchdog?