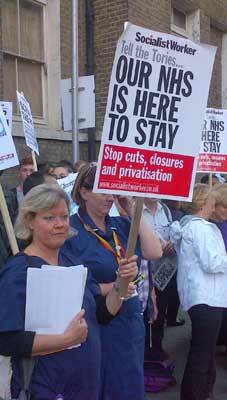 An NHS watchdog has blasted Britain’s largest NHS trust for the way it treats its staff.

According to one health worker, quoted in a recent Care Quality Commission (CQC) report into Barts Health, job cuts in hospitals are so severe they have “made it hard to care” for patients.

Many believe that behind the government’s attacks on the NHS lies a project to transfer it to the private sector. But the latest report shows that cuts and the drive to privatisation are the problem.

The CQC report paints a picture of staff struggling in ever more impossible situations. They shine a spotlight on the problems faced by every NHS trust under the Tories.

Barts management has pushed through a series of job cuts and “downbanded” remaining staff.

Yet time and again the CQC cites lack of staff and resources as a key problem. It describes “insufficient beds”, long waits for treatment, overcrowding and too few staff.

It found that across all sites inspected “there is a reliance on agency staff which has an impact on timeliness and quality of care”.

Staff numbers are “variable” and this “can leave patients at risk from unsafe care”. In some areas there are “chronic shortages of essential equipment”.

This isn’t accidental—it’s part of a conscious move to privatise the NHS.

Barts health worker Sue told Socialist Worker, “Barts management and the government are quite happy to run down the NHS so they can justify bringing in private firms.

“These firms don’t give a toss about local communities or the people who work in the NHS. They’re just asset stripping.

“There are lots of negative stories fed to the press about the health service. It’s part of a bigger agenda.”

Sue said the attacks on workers had “divided people” and squandered a lot of “goodwill” in the NHS.

“They’re changing the whole health service ethos and it’s being done deliberately in my opinion,” she said.

The culture of bullying much of the media has focused on (see below) isn’t accidental either.

Workers linked it to the formation of Barts Health NHS Trust four years ago.

“I think if you’d asked the same question about bullying before the merger you wouldn’t get anything like that response,” said Andrea, another Barts worker.

“Since the merger the feeling is that whatever you say is not listened to. The sacking of union rep Charlotte Monro (see page 6) has made people more scared to speak out. They feel they can’t say anything.”

A culture of bullying

Barts health workers “felt that they had no voice”.

The CQC cited a survey last year that found that 32 percent of health workers at Barts Health NHS Trust reported being bullied.

The average figure for NHS trusts across England is a grim 24 percent.

The CQC said, “Morale was low across all staffing levels and some staff felt bullied.”

The report said that bosses “must urgently re-engage with staff” and “adopt a zero tolerance to bullying”.

Workers said they “felt under pressure not to tell us where there were concerns” about staffing and safety in their workplace.

Some said “they were told not to say much at the CQC inspection”.

There is consistent praise for NHS staff throughout the CQC reports.

“Patients held staff in high regard and felt them to be committed, compassionate and caring,” it found.

One patient described nurses as “lovely” while another said the nurses were “friendly…I can’t fault them at all”.

One more comment from a patient said that staff provided “excellent healthcare”.

But patients did say that staff often seemed very busy.

This meant they “did not spend quality time with them” and “did not have sufficient time to communicate with patients and families”.

Health worker Sue said, “The NHS is a little bit of socialism in a capitalist world and that’s why people love it”.

In maternity and family planning at Whipps Cross Hospital, “changes to staffing structures were impacting on the ability of staff to consistently provide effective care”.

The CQC said midwife-to-birth ratio was higher than the national guideline. Whipps has a high Caesarean rate and “delays in the induction of labour” were a contributory factor.

The government is rushing “clause 118” through parliament as part of the Care Bill. Known as the “hospital closure clause” it will give the government more power to shut down hospitals.

Clause 118 would allow privatisation and cuts to large sections of the NHS with no consultation or debate. A trust special administrator would be able to “reconfigure whole health economies” to get around opposition.

Hard for patients to make complaints

Patients said it was hard to make complaints. The Patient Advice and Liaison Service previously had a staffed office at each site.

These have been replaced by a central telephone number.

The CQC found “when we rang the number, on a number of occasions, there was no response”.