This article is over 7 years, 6 months old
Dave Sewell says council homes are being demolished in droves in London, as the land is sold to rich developers keen to profit from rocketing prices
Downloading PDF. Please wait...
Tuesday 22 July 2014 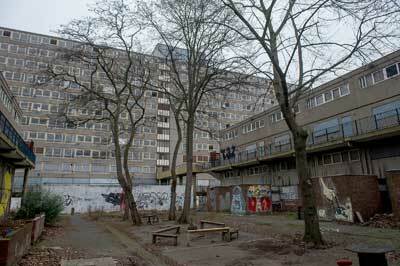 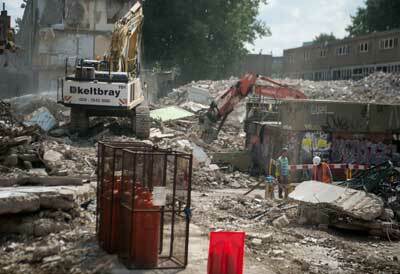 Average house prices in London rose by nearly ten percent last year—over twice as fast as any other region. The average home now costs £500,000 to buy or £1,348 a month to rent.

With wages low and benefits slashed, it’s becoming impossible even for skilled workers to afford to live in many areas—let alone the poorest.

The case to get more of London’s housing out of the clutches of private landlords and the chaos of the market couldn’t be clearer.

But the coalition government, Tory mayor and council bosses, often in the Labour Party, are doing the opposite.

Council houses are demolished to flog land to rich developers under the banner of “regeneration”.

Many of the new properties that replace them will be sold off to absent owners, for whom they are more a reserve currency than a home.

Most of the development contracts require a minimum number of them to be at “affordable” rents—anything up to 80 percent of market rents.

In Westminster council bosses say you’d need to be on £109,000 a year to rent a three bedroom “affordable” flat. But half of the people in Westminster’s council houses live on less than £12,000 a year.

Now London mayor Boris Johnson has £400 million to underwrite new “housing zones” on “brownfield” sites. And he hopes the infrastructure bill will open up more of them.

Brownfield sites can be built on if “real or imagined environmental contamination” is dealt with. But the only “contamination” on many of these sites are the people who live there and their homes.

The plan is to build 50,000 more homes, after Johnson missed his target of 42,000 homes for London last year. But who will they be for?

We can get an idea from the same battle lines that have already been drawn up in boroughs across London.

In Haringey Defend Council Housing campaigners have led a series of protests against plans to demolish of hundreds of council homes (see below).

In Newham the Carpenters estate is full of shuttered empty homes as luxury flats mushroom around it. The Labour council there tried to send 25 homeless young mothers outside London last year rather than pay to house them.

Their campaign, now called Focus for the Future, put photos of people waiting for housing on the empty homes, with the slogan “This home needs a family, this family needs a home”.

In Southwark the vast Heygate Estate that once housed thousands has been reduced to rubble.

In its replacement, fewer than 80 homes will be provided at so-called social rents. When Berkeley Homes turned up to pitch at Hackney Council, they began by painting the well-loved Woodberry Down estate as gloomy and run-down.

When asked about residents who want to stay, Berkeley boss Piers Clanford retorts, “I’d like to live in Mayfair”.

On Love Lane in Haringey, north London, Ismet and Ergul are finding out what regeneration means.

They live on a leafy estate of well-built council homes that has the misfortune to be on highly valuable land between Tottenham Hotspur’s football stadium and the nearest train station. And soon it could be gone.

“The council has given us three options, which all involve tearing down some of the estate, and we don’t get to say we don’t want any of them,” Ergul told Socialist Worker.

“They want to make it out like we want the place demolished, but it’s not true—we will have been forced.”

The council has told residents that they will still be able to live in “affordable housing”.

This could cost more than double the rent they pay the council, and without the rights that come with a secure council tenancy. “I think that on those conditions we should stand against it and not let it happen,” said Ergul.

“But a lot of the people here aren’t fluent in English and don’t understand what is being done to them.”

Hundreds of homes are in line to be knocked down. Ismet said, “The people here are poor, and won’t be able to afford to live in the area any more.

“What will happen to us? We’ll be gone, and more middle class people will take our place. I’ll lose the flat where I lived with my mother until she died recently, and all the memories that are there.

“I’ll lose the friendships and relationships I’ve built up over years. We want the councillors to defend our rights.

“But none of this is for our benefit. It is to make money.”

For more info and resources defendcouncilhousing.org.uk

The Heygate was in the Elephant and Castle area of Southwark, and the gated community that replaces it could be crowned with a tacky bronze elephant.

Sculptor Sam Keil boasts having one of her works allows developers to “charge whatever rent you like”. Council officials were “very enthusiastic” about it.

Landlord Lewis set to cash in

How will all this affect Brandon Lewis, newly promoted to the beefed-up position of housing and planning minister?

Probably not too badly. As well as ripping off firefighters in his old job as fire minister, Lewis is a private landlord who gets money from multiple properties.

Unsurprisingly, landlords’ groups “look forward to working closely” with their colleague in Whitehall.

If homes are sold off in a way that promotes Tory regeneration, the government will write off the historic debts that are artificially attached to them.