This article is over 8 years, 9 months old
Criminalising those who reveal state secrets comes naturally to the security services—because the state sees us all as enemies, says Raymie Kiernan
Downloading PDF. Please wait...
Tuesday 27 August 2013 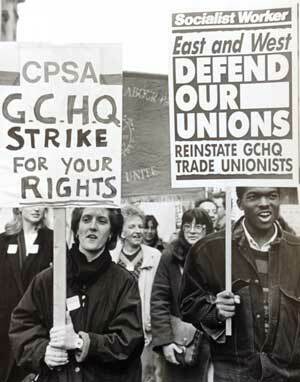 Protest for union rights at GCHQ in 1988 (Pic: John Sturrock)

Some light was shed on the world of secrets and surveillance last week, as police detained David Miranda at Heathrow airport under the Terrorism Act 2000.

His crime was being the partner of a Guardian journalist who writes about government spying using leaked information from US whistleblower Edward Snowden.

The newspaper’s editor says that senior civil servants told him, “You’ve had your fun. Now we want the stuff back.”

The Tories knew the missiles would make Berkshire a target for Russian retaliation, and that there would be stiff opposition.

Tisdall sent a photocopy of a memo to The Guardian. It published the story but the government demanded the memo back and took the newspaper to court.

The court ordered The Guardian to return it—and it did. Sarah Tisdall was then identified and jailed for six months for breaking the Official Secrets Act.

The case of the British agent, Colin Wallace, shows how the secret state turns on its own kind if they try to reveal dangerous truths.

His team was also involved in a dirty tricks campaign against Harold Wilson’s government as the ruling classes panicked over the scale of workers’ revolt sweeping Britain in the early 1970s.

But this was too much for Wallace. He later blew the whistle on the cover up of child abuse at Kincora Boys Home in Belfast—and links between the home, loyalist paramilitaries and British security services.

Wallace was eventually sacked for leaking documents to journalists—even though that was his job.

He was later framed for the manslaughter of a friend. His conviction was eventually quashed after a book by Socialist Worker’s Paul Foot brought the case to light.

These cases, with countless others, show that the British state is not neutral. It exists to protect the ruling class, and its security and police forces seek to control society to further their interests.

They fear the power of the majority who, when they are organised, can overthrow even the most repressive state.

State surveillance in Britain is on the increase. It is one way our rulers attempt to stop unwanted stories seeing the light of day.

The legality of this colossal data collection—equivalent to sending 2.67 billion books every day— is now being questioned.

The Interception of Communications Commissioner reported last month that there were a record number of surveillance requests made by British police and security forces last year.

Over 570,000 authorisations were given permission to obtain “communications data” detailing who is phoning and emailing who, and when it happens—a 15 percent increase on 2011.

Interception warrants allow spooks to secretly eavesdrop on phone calls or read emails and texts. They must be signed off by a secretary of state.

The true number of people under surveillance was disguised by changes made in 1998 to the issuing of warrants. Since then, a single warrant can encompass many people.

The Metropolitan Police now operate a covert surveillance system that emits a signal over an estimated ten square kilometre area to track a person’s movements through their mobile phone.

Say nothing? Go to prison

David Miranda was held under Schedule 7 of the Terrorism Act 2000. This relates to Britain’s ports and airport transit lounges—where normal rules don’t apply.

It provides the police powers to stop, search and detain people without suspicion.

People detained under it who exercise their right to silence could face three months in jail or a fine. They have no right to a solicitor.

Guidance to the law states that Schedule 7 “should only be used to counter terrorism and may not be used for any other purpose.”

Since being exposed in the 1970s, top spooks at GCHQ were never quite sure whether or not to admit they existed.

They were quite sure certain, though, that their employees were not allowed the right to strike.

In 1994, John Sheldon, general secretary of the Nucps, a union representing GCHQ middle managers, said of government ministers, “No form of trade unionism is acceptable to them for staff at GCHQ”.

In 1981, a one day strike was followed by further disruptive action.

Many of the most used “anti?terror” laws were introduced by Tony Blair’s Labour government.

In the clampdown on civil liberties that accompanied the “war on terror”, this legislation has been used against protesters—and especially against Muslims.

Labour’s policy of allowing the detention of suspects for up to 28 days without charge was renewed by the current Tory coalition government in 2010.