Racism and resistance in the wake of Woolwich

This article is over 8 years, 6 months old
The killing of soldier Lee Rigby sparked a wave of anti-Muslim attacks. But politicians and pundits created the climate for them, writes Annette Mackin
Downloading PDF. Please wait...
Tuesday 09 July 2013 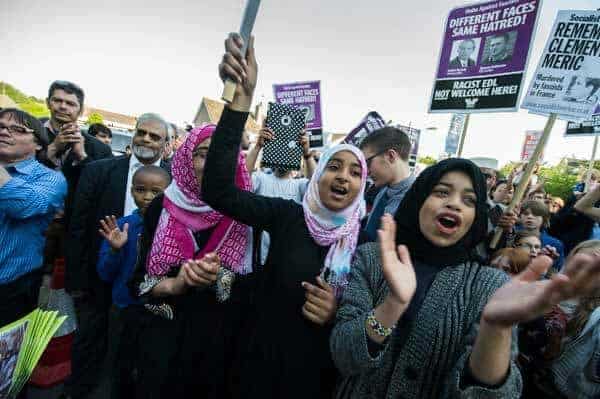 There has been a major shift in the level of racism in Britain over the last few months. Racists seized on the killing of soldier Lee Rigby in Woolwich, south east London, in May to try and whip up hatred against Muslims.

But these attacks have been met with a response by anti-racists, who have mobilised thousands to stand up to Islamophobia.

Racists have attacked more than a dozen mosques since Lee Rigby’s killing. The latest is the Cradley Heath Central Mosque and Islamic Centre, near Birmingham.

The slogan “never surrender” and “EDL”—initials of the racist English Defence League—were found sprayed on its walls on Monday of last week.

One mosque was burned to the ground in Muswell Hill, north London, and “EDL” was daubed on the wall too.

Many say that the racist backlash is worse than the one sparked by the 7/7 bombings in London in 2005.

The bombs killed 52 people and opinion polls showed a spike in Islamophobic abuse and attacks. But one report said the incidents “tended generally to be sporadic and isolated”.

A strong anti-war movement that had pulled in tens of thousands of Muslims helped to counter racism.

Today we have had years of politicians and media pundits legitimising racism. Racist policies and anti-immigration rhetoric have given racists confidence.

“A process has been built up,” Safder, a cab driver and member of the Redditch Central Mosque told Socialist Worker.

“With the recession, politicians created an external threat to scapegoat for all the problems they created.”

Around half of mosques and Muslim centres in Britain have been attacked since 9/11, according to a recent report by professor Nigel Copsey.

But for all the media and politicians’ scapegoating, there is resistance to the racists.

And the recent attacks on Muslims have led to more people getting organised.

After the Muswell Hill fire, Unite Against Fascism (UAF) organised a solidarity vigil. Some 500 people turned out in support.

As Mukhtar Master, a Muslim council worker in Preston, put it, “We know it’s only a small minority of people in Britain who want to cause us problems.

“My neighbour came round on the day of the Woolwich events. He wanted to show solidarity as he sensed that what happened would be used to blame all Muslims.”

The aftermath of Woolwich shows that we should never be complacent about the racists’ ability to organise.

But it also shows that we have the power to push them back.

Attacks are linked to EDL