Abortion is under severe threat in the US, putting women’s lives at risk. Sarah Bates explores the case that granted women abortion rights in 1973
Downloading PDF. Please wait...
Monday 27 June 2022

Activists should be preparing to celebrate the 50th anniversary of Roe v Wade this winter. Instead, they are locked in a battle to defend its very existence. The US Supreme Court decided last Friday to overturn the landmark case that decriminalised some abortions. Its rollback—which affects the lives of women across the country—has to be met with a ­fightback.

Half a century ago Norma ­McCorvey, later known publicly as Jane Roe, had no reason to believe her unwanted pregnancy would define reproductive rights for the next half century. But then she was introduced to lawyer Linda Coffee. They began an unlikely—and at times deeply uneasy—alliance. Coffee was one of many lawyers and activists who were looking for ways to challenge US abortion law. She argued that it was unconstitutional for women to not have legal access to abortions.

The case had the greatest chance of success if there was a real person wanting a real abortion. That’s where McCorvey came in. The pair joined forces with Sarah Weddington, another lawyer seeking to liberalise abortion law. And they argued it on the basis that it was a ­fundamental right for all women. “We wanted a decision that ­abortion was covered by the right of privacy,” said Weddington. “Our ­principles were not based on how conception occurred.”

At the first hearing they came up against the lawyers representing Henry Wade, the district attorney for Dallas County, Texas. Wade wanted to keep sending abortionists to prison, but the Roe team won a partial victory. The panel decided it was unconstitutional but didn’t tell Wade to stop enforcing the law. In May 1971, when the Supreme Court announced it would hear an appeal to the first ruling, everything changed. Until then the team had relied on friends donating office space and helping with research.

Now the spotlight was on them, the lawyers were “flooded” with offers of money and help. In the Supreme Court on 13 December 1971 Weddington argued that restrictive abortion laws clashed with the guarantee of “liberty” ­written into the constitution. And she exposed the hypocrisy of bigots insisting that the unborn had a “right to life”, despite foetuses not being considered alive elsewhere in law.

The lawyer representing Texas misjudged the mood and tried to play the courtroom for laughs. He opened by saying, “It’s an old joke, but when a man argues against two beautiful ladies like this, they’re going to have the last word.” Following another hearing in ­October 1972, victory was declared on 22 January the following year. ­Justice Blackmun wrote an opinion that women should be able to get abortions until the end of their second trimester.

The judgement explains that ­throughout the first trimester, “The attending physician, in consultation with his patient, is free to ­determine, without regulation by the state, that, in his medical judgement, the patient’s pregnancy should be terminated.”

For the first 12 weeks of a pregnancy an abortion was a federal right—and individual states could legislate on abortion until the end of the second ­trimester. Since then abortion rights have come under years of attacks.

The first years of Norma McCorvey’s adulthood were marked by a string of unwanted pregnancies. She was “shocked” when she became pregnant at 17. By the time her daughter was born, McCorvey was divorced and begged her mother to raise her child. Her second daughter was adopted, after McCorvey asked a nurse if there was a “way that they take your baby”. By her third unplanned pregnancy at 21 years old, McCorvey couldn’t face either option again.

“I didn’t want to give birth to another unwanted child. I didn’t want to have to give up another child. I didn’t want a child to be born with me as a mother,” she said. For McCorvey any legal outcome of the case would be too late—she gave birth shortly after the first hearing and almost two years before the final judgement. She wrote, many years later, of a “moment or two of pure truth, total clarity” followed by rage. She realised that successful lawsuit or not, she would have to carry the pregnancy to term.

“I was nothing to Sarah and Linda, nothing more than just a name on a piece of paper”. It’s been reported that McCorvey never forgave Waddington for not helping her procure an abortion in Mexico—the young lawyer having previously had one herself. McCorvey’s anonymity didn’t last. She gave interviews and ultimately was co-opted by the anti-choice movement in the 1990s.

She said she regretted taking part in the case and joined anti-choice marches and publicity stunts. McCorvey was partly driven by a frustration that she was slighted by her lawyers and the wider feminist movement. She also needed money—and the anti-choice bigots have very deep pockets. McCorvey’s life was profoundly shaped by her involvement in the case, and could have been very different had she had access to abortion.

A major advance, but it also fell short

Roe v Wade was a huge victory for abortion rights. The legal ruling didn’t happen in a vacuum, but out of massive social pressure to give women the right to choose. Yet the ruling never went far enough. Its weaknesses have allowed reactionary elements in both federal and state legislature to starkly strip away abortion access in the intervening decades.

The 1973 ruling located a right to an abortion as one resting with a doctor’s decision. That meant it did not fully grant a woman’s right to choose. In 1992, Planned Parenthood v Casey saw the Supreme Court rule in favour of putting additional restrictions in place. Individual states could restrict access during the first trimester as well as the second.

The US supreme court ripped up abortion rights last Friday, with nine unelected judges voting six votes to three to overturn Roe v Wade. The majority ruled to uphold a 2018 Mississippi law that banned abortions after 15 weeks. It was passed in 2018, but put on hold by lower courts. 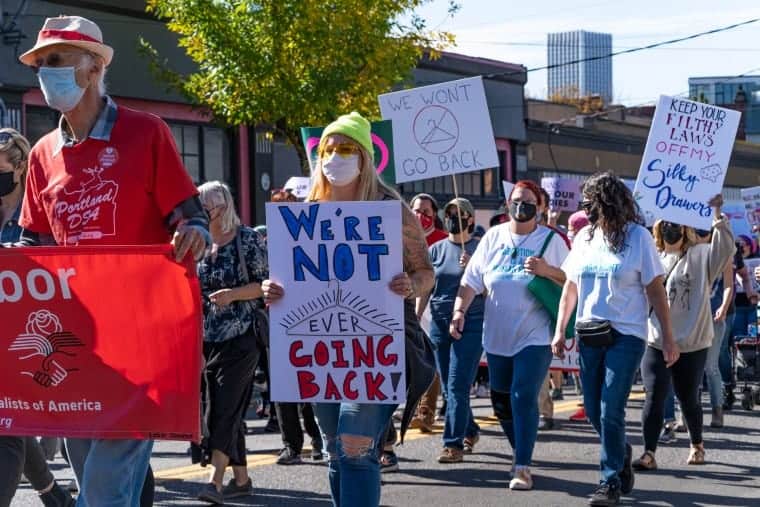