Tory ‘anti terror’ bill is a licence for Islamophobia

This article is over 7 years, 1 months old
Simon Basketter looks at the Home Office’s new ‘counter-terrorism’ bill, and explains how it will give draconian new powers to police and border guards
Downloading PDF. Please wait...
Tuesday 02 December 2014

In the run-up to next year’s general election the terror threat has been raised to severe and the Tories are rushing through a draconian bill.

Home secretary Theresa May said it is “a considered, targeted set of proposals that will help to keep us safe at a time of very significant danger by ensuring we have the powers we need to defend ourselves.”

It would give police power to seize the passport and tickets of somebody travelling within the UK for the first time.

At present the home secretary has to personally authorise each seizure of a passport. Under the bill, police and border officials will be granted the power to confiscate passports on the spot.

The potential for racial profiling is inherent in the measure. Passports can be seized for up to 30 days, with the decision reviewed after two weeks by a magistrate.

Under Temporary Exclusion Orders, people with British passports can be banned from Britain for two years. They can only return under “controlled” circumstances.

The bill will impose requirements on those not facing prosecution on their return. They include agreeing to be interviewed by the cops and to keep the authorities informed of their current address.

They could even be forced to take part in a compulsory “de-radicalisation” programme.

The home secretary will sign off the orders on the basis of “reasonable suspicion”.

An extra £120 million is to be spent on the disgraced Prevent programme. It has now been spread beyond the existing 30 areas to across Britain.

Terrorism Prevention and Investigation Measures (TPIMs) replaced the Labour-era’s Control Orders, which restricted the activity of people the security services didn’t like. They imposed house arrest on suspects, denied them access to the internet and phones, and could have them relocated.

Under the 2011 TPIMs, the power of relocation was scrapped. Yet May proposes bringing back the power of internal exile to send people to specific places and limit the distance they can travel.

Public bodies including colleges, schools, prisons and councils would face a new legal duty to stop people being drawn into “terrorism”.

Even the Home Office impact assessment admits new powers for ministers to deny “extremists” a platform “could be perceived as raising a freedom of speech issue”.

The Home Office will be able to issue court orders obliging bodies to comply with directives.

The bill doesn’t explain how exactly this is going to happen. But it does give the home secretary the task of issuing guidance on the matter.

This will lead to further attacks on schools—and give the home secretary the power to carry them out.

The British government was complicit in ill-treatment of Michael Adebolajo, one of Lee Rigby’s killers, during detention in Kenya, a committee of MPs has said.

The official report from the Intelligence Committee into the circumstances leading to Rigby’s murder accepts that complicity for the first time.

However the report overwhelmingly focuses on why the spooks need more resources so they can get more information.

Adebolajo alleged that he was beaten and threatened with electrocution and rape during his detention in Kenya in 2010.

The report said Adebolajo was interviewed by Kenyan police and then by a counter-terrorism unit, the ATPU, whose name the committee redacted, using the term Arctic instead. “This unit has a close working relationship with HM government (HMG),” the report says.

“If Adebolajo’s allegations of mistreatment did refer to his interview by Arctic then HMG could be said to have had some involvement—whether or not UK personnel were present in the room,” it says.

The committee added in a paragraph partially redacted, “Given that *** has a close relationship with Arctic , ***, this certainly could be enough to raise questions of complicity.”

MI6 dismissed Adebolajo’s claims without asking the Kenyans about them—or even themselves.

The report would not confirm or deny that MI5 had been trying to turn Adebolajo into an informant.

Friends and family say Adebolajo believed he was tortured at the behest of British intelligence. They say he was asked questions that could only have been fed to his interrogators by British sources.

Jeremiah Adebolajo, Michael’s younger brother, said, “They began to harass him. They kept on calling him, they kept on asking him to meet, they kept on going to his house, and really disrupting his life.

“They were putting a lot of pressure on him to cooperate with them in one way or another.”

His friend Abu Nusaybah made similar allegations in an interview with the BBC at the time of the attack.

He was arrested as he left the TV studio.

Some 753 people have been arrested on terrorism-related offences since April 2010.

Just 212 were charged and 148 prosecuted—less than a fifth of those arrested.

In the year ending March 2014 230 people were arrested for “terrorism-related offences”.

Just 27 of the 74 charged with a terrorism-related offence were convicted and 44 await trial.

The Counter-Terrorism and Security Bill is the seventh major counter-terror law introduced in Britain since the 9/11 attacks.

The last Labour government brought in six of them. And it is backing this one.

The investigation into intelligence failings in the Lee Rigby case called for more surveillance of Facebook and other social media.

But the report then said that Lee Rigby’s killers used phone boxes in order to avoid surveillance. 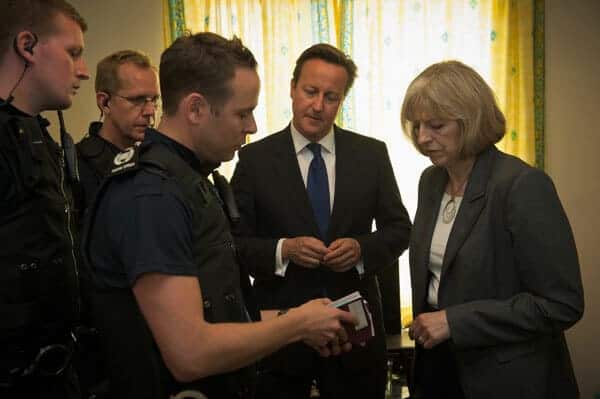