Local government workers who have been battling to save their pensions are being offered a deal that means massive cuts.

But some union leaders are trying to sell it as a victory—and using the less than obvious sums of the local government pensions scheme to sow confusion over what has really happened.

A number of attacks are hidden in the detail of the deal. Most significant is the shift from a “final salary” pension scheme to a “career average” scheme.

Final salary pensions are calculated using the wage you are on when you retire. This is multiplied by an “accrual rate”, which is a fraction of your pay—in the case of the old scheme, 1/60th.

Then that is multiplied by how many years you worked for. A career average scheme works differently. You accrue part of your salary each year—in the new scheme it is 1/49th of your pay.

To work out the total, each amount is converted into “today’s money” through revaluation to take account of inflation. In the new scheme this is done with the lower CPI rate of inflation, not the higher RPI.

All this means that estimating what your actual pension will be becomes more complicated than in a final salary scheme, because it relies on future projections of two numbers—the rate of inflation, and your pay rises. Small changes in these numbers can make a surprisingly big difference. And that makes things easier for those who want to make a bad deal look like a good one.

The documentation released with the deal is signed by the Unison, Unite and GMB unions, and the employers’ Local Government Association. It claims that “there is nothing automatically worse about career average schemes” and better accrual rates “could mean many members build up better pensions”.

But this is not true. A career average pension can only ever be “better” if a worker’s wage stagnates or even decreases in real terms (see How your pension could be hit). Today, workers have suffered years of pay freezes. But historically this is very rare. Such a situation has certainly never carried on for decades.

And this change is not the only problem with the deal. It also removes the “normal pension age”, meaning the retirement age will rise as the state pension age does. This is already set to rise to 68 for younger workers—and could yet go much higher into the 70s. Anyone who has the audacity to retire before reaching this unspecified age will be severely penalised.

The mass strike of 30 November was against plans to make workers “work longer, pay more and get less”. The local government unions have held off an increase in contributions, at least for most workers.

But working until 67 or 68 will mean paying those contributions for years longer. And workers will face a double bind over their retirement age—the choice between retiring at 67 or 68 and getting less, or retiring “early” at 65 and getting even less than that.

There’s only one option that’s any good—and that’s to reject the deal and keep fighting.

The new option of poverty

There is an innovation in the new scheme—a “50/50 option” for the low-paid. The idea is that workers can reduce their pension contributions, paying just half the normal amounts.

But in return they will only get half of the normal pension benefits for that period when they retire. The proposal’s advocates say it would help-low paid workers, especially women.

Much is being made of the fact that the new scheme is still a “defined benefit” scheme. This is better than a “defined contribution” scheme. These take members’ money and gamble with it on the stock markets. But not all defined benefit schemes are equal.

In a career average scheme, benefits are based on your wage in each year you worked. Gaps can hit you hard. But a final salary scheme is designed to protect your current standards of living.

Rate wiped out by inflation

The new scheme’s accrual rate of 1/49th on the face of it looks better than the old one of 1/60th. But it’s not that simple. In a final salary scheme you know that the amount you get is based on today’s money.

But in a career average scheme, you are at the mercy of the inflation measure used to “revalue” your old wages. In the new scheme this is the usually-lower CPI rate.

It doesn’t sound like much. But that one change cuts a huge swathe off the pension—and wipes out the effect of the new accrual rate. 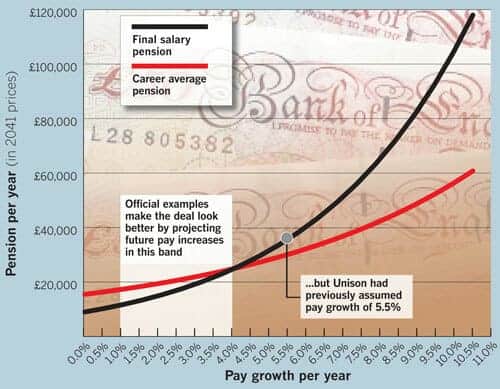 How your pension could be hit