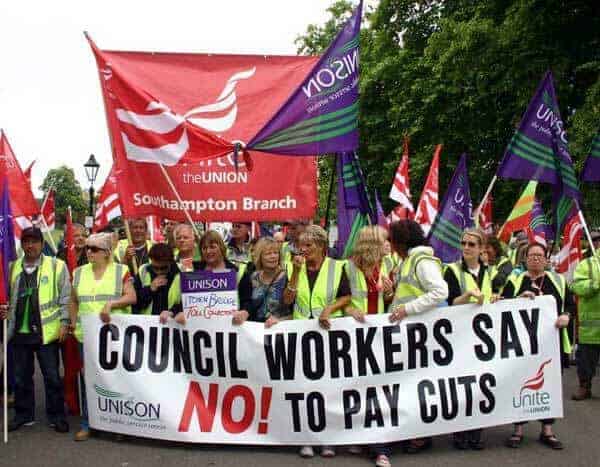 Workers in Britain are suffering real terms pay cuts for the first time since 1977 according to the Institute for Fiscal Studies (IFS).

Its recent report showed that workers have suffered a bigger fall in real wages since 2008 than in any comparable five-year period in history.

The Tories say falling unemployment means this recession isn’t as severe as previous slumps (see below).

But this masks huge pay cuts as workers lose money or hours rather than their jobs.

Head of the IFS Paul Johnston described the current crisis in the Financial Times.

“This time it really is different,” he wrote. “We are in uncharted territory. The long-term consequences of all this are likely to be quite profound.”

For workers the consequences of the recession are already very profound.

Workers’ wages fell by £52 billion over the past five years according to a TUC report released last week.

Compare this to the money of the bosses. The TUC report shows the average workers’ wage is 145 times less than what an average chief executive grabs.

The IFS report also shows that the value of wages has fallen by 6 percent since 2008.

Wages rose by an average of 2 percent a year before the crisis hit.

Now pay cuts, combined with a rising cost of living, mean workers are 15 percent worse off than they were in 2008.

In reality this weakens workers and makes further attacks more likely (see below).

And pay cuts are having a devastating effect.

More low-paid workers are being forced to rely on food banks to feed their families. Stress about how to make ends meet is rising.

The Citizens Advice Bureau dealt with 8,192 new debt problems every working day in 2012.

And more people are relying on credit cards to pay for essentials such as food and utility bills.

Research estimated that more than five million households in Britain were in debt to their energy supplier in April this year.

That compares to fewer than four million in 2012.

The TUC used its report to spur a campaign called “Britain Needs a Payrise”. It’s right to fight for pay and reject the argument that there’s no money for wages to go up.

But we will need more than this to stop the Tory assault on our living standards.

Workers will need to mount a fightback together to take on the government and the bosses who sparked the crisis in the first place.