This article is over 17 years, 11 months old
ALEX CALLINICOS writes on the inspiration of the World Social Forum in India.
Downloading PDF. Please wait...
Saturday 31 January 2004

RETURNING TO London from Mumbai (Bombay) was like moving from technicolour to black and white.

The diversity and energy of the Indian movements represented at the fourth World Social Forum (WSF)-and the noise and colour of their demonstrations-dominated what can only be called a festival of the oppressed.

The very strong presence from the rest of Asia also helped to make the Mumbai WSF such a success. Tibetan monks, South Korean socialists and Nepalese Dalits (untouchables) jostled in the dusty, crowded, but cheerful lanes of the WSF site.

Joseph Stiglitz, Nobel prize winner, chairman of Bill Clinton’s Council of Economic Advisers and ex chief economist of the World Bank, came to speak on the same platform as left wing intellectuals and socialist activists. This is a real tribute to the power of the anti-capitalist movement.

What light did the Mumbai forum throw on the development of that movement?

There is a longstanding debate over the relationship between social movements and political parties, which are banned from participating in the social forums. But India has the largest Communist movement in the world. It has two mass parliamentary parties, the quasi-Maoist Communist Party of India (Marxist) and the Communist Party of India (pro-Moscow in the days of the USSR). It also has Marxist-Leninist organisations that often lead large and militant movements in different parts of the country.

The WSF simply couldn’t have happened in India without the support of the big Communist parties. Their presence in the Indian Organising Committee (alongside non-aligned activists and intellectuals) was discreet but crucial.

It marked an important step towards the anti-capitalist movement by parties with a history of controlling other mass organisations.

The participation of non-governmental organisations (NGOs) in the WSF was controversial. The Indian left is very critical of NGOs from the advanced capitalist countries for creaming off activists into well-paid bureaucratic jobs and confining the movements they back to relatively narrow issues.

This critique-plus the WSF’s exclusion of armed struggle groups (some Marxist-Leninist organisations are still involved in guerrilla campaigns in some regions of rural India)-was used to justify the organisation of two rival forums.

One of them, Mumbai Resistance 2004, took place at the same time as the WSF. It was a flop, attracting a few thousand compared to the 120,000 who thronged the WSF. This is yet more evidence that cultivating revolutionary purity for its own sake merely isolates you from the living movement.

The most impressive thing about the WSF was the extensive participation of movements of the most oppressed sections of Indian society-the Dalits, lower castes, and so called tribals. It is a failing of the Indian left that it seems to have had little connection with these movements.

But the politics of caste is very complex and it would be a mistake to romanticise these movements. Some Dalit-lower caste coalitions are controlled by the Western NGOs that finance them.

It was obvious from the banners that often prominently displayed the name and even the image of the coalition’s president that organising the oppressed can become a vehicle for greedy and ambitious middle class political entrepreneurs.

Movements of the Dalits and the lower castes have often become integrated in India’s highly fragmented and corrupt political system.

The success of the Mumbai WSF offers the Indian left an enormous opportunity. The constructive cooperation between the left parties and the NGOs that made this success possible could provide the basis of a mass anti-capitalist movement in India.

This could begin to challenge the communalist and neo-liberal policies of the Hindu chauvinist BJP government.

But the reverberations of Mumbai will be heard well beyond India. As at earlier World and European social forums assemblies of anti-war and social movement activists met to hammer out calls to action.

These meetings are controversial. Figures on the right of the movement such as Chico Whittaker from Brazil and Bernard Cassen from France argue that the social forums should be pure “spaces” for discussion and education rather than launching pads for mass mobilisations.

History has already spoken against this position.

15 February 2003-the greatest global day of protest in world history-emerged from the European Social Forum in Florence and the last WSF in Porto Alegre, Brazil, a year ago.

Discussion and education are important, but only when they feed into and learn from mass mobilisations.

In Mumbai, thanks to the cooperation of Focus on the Global South, an important left wing NGO based in Bangkok, the international peasants’ movement Via Campesina, and the Stop the War Coalition, the call went out to make 20 March a global day of protest against the occupation of Iraq.

The Mumbai WSF is an enormous inspiration. It has also set a formidably high standard for others to match-for example the next European Social Forum in London. 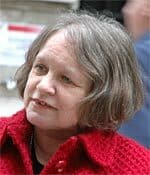 New challenges for Respect after the elections