A short war will boost US power

This article is over 18 years, 10 months old
Paul McGarr explains why the main enemy is at home
Downloading PDF. Please wait...
Saturday 22 March 2003

SOME IN the anti-war movement argue that once war starts it would be better for it to be over quickly, with the US and Britain winning with the minimum of fighting. That is an understandable reaction, motivated by wanting to see the least loss of life in the immediate conflict. It is, however, mistaken.

The US doesn’t want war just to remove Saddam Hussein. It wants to show that it can use its military power to impose its will anywhere in the world. The easier the US finds that in Iraq the more likely it will go on to use military power elsewhere. Bush already has a list of possible targets – Iran, North Korea, Syria, Libya, Cuba.

The US has already meddled with attempted coups against the elected government of Venezuela in South America. And the US backs the right wing government in a civil war in neighbouring Colombia.

A quick victory in Iraq will make war more likely in these areas. It would also mean the US would push even harder to impose its interests and those of the corporations that back it across the globe. There would be even more savage IMF austerity programmes to suck wealth out of indebted countries.

Multinational drugs companies would be more determined to deny AIDS treatments to the poorest countries of the world.

US power would also swing even harder behind regimes such as Israel, so bringing more suffering to the Palestinian people. Everywhere there would be the spectre of an emboldened US military in the wings to ensure no government dared cross the US. Of course, even the mightiest empire is not immune from mass revolts which can humble it.

But the immediate result of a quick victory in Iraq would be to strengthen the US ruling class and its allies and weaken those who oppose it. A victorious Bush would also find it easier to push through attacks at home, as would a victorious Blair.

Socialists have done and continue to do all in our power to build the movement to prevent war and to stop war when it starts. But if war starts the very worst outcome would be a quick victory for the US and Britain.

The best response to war would be protests across the globe which make it impossible for Bush and Blair to continue. But while war lasts by far the lesser evil would be reverses, or defeat, for the US and British forces.

That may be unlikely, given the overwhelming military superiority they enjoy. But it would be the best outcome in military terms. It would make it more likely that Blair would not survive, and Bush would be in trouble too.

It would limit the ability of the US and its allies to impose suffering, war and death on an even bigger scale. Socialists have a long tradition to draw on in taking this stance. When the First World War started many who had spoken against war in the run-up to it fell into line behind their national governments when it started.

It was very important that in Germany the revolutionary socialist MP Karl Liebknecht spoke out against war when no one else in the parliament did. He refused to vote for war credits to finance the German war effort and declared, ‘The main enemy is at home.’

That meant refusing to drop struggles against employers and the government over domestic issues. That point applies absolutely today. There should be no question of dropping strikes such as that planned by the firefighters because war starts. Nor should any other workers drop their claims.

Liebknecht’s stance made clear that for him the main enemy was his ruling class, and that the defeat of that ruling class and its military was the lesser evil amid the evil of war.

Socialists in Russia at the time spelled this out. The leading revolutionary Vladimir Lenin said that faced with a barbarous war the lesser evil for the working class was ‘the defeat of its government in a reactionary war’. He argued that ‘whoever wants a lasting and democratic peace must stand for civil war against the government’ and that ‘the latter’s military reverses facilitate its overthrow’.

That argument was the preserve of a minority at first but was borne out in practice. The First World War was ended when, first in Russia in 1917, then in Germany in 1918, mass revolutions toppled the warmongering governments. What turmoil war will bring today is impossible to predict.

Civil unrest in Britain could put the survival of Blair’s administration in question. And the nightmare that haunts Bush and Blair is that revolt and revolution in the Middle East will topple regimes there and challenge Western domination over the region and its oil wealth.

Everyone in the anti-war movement should do all in their power to build protests against Bush and Blair’s war. While war continues any military reverses they suffer will help the process of stopping them today and of preventing the bloody future they plan for us all. 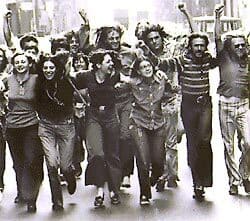 Shivers down the backbone