The debate over who will replace United States Supreme Court justice Ruth Bader Ginsburg after her death on Friday has already begun.

Trump is likely to appoint a reactionary candidate as her replacement.

US Supreme Court justices are appointed by the president and approved by the Senate. This means that the courts and legal system are political battlegrounds with justices often voting on party lines.

And this is a danger to fundamental rights that have been fought for.

The 1973 case of Roe v Wade that protects a woman’s right to access abortion in the US is in danger of being overturned.

Trump has said he will put forward a new female nomination “without delay”.

He told a rally in North Carolina, “It will be a woman. I think it should be a woman because I actually like women much more than men.”

When US justice Antonin Scalia died nine months before the 2016 US election, theRepublican Senate refused to consider any nominee until the next president was appointed.

This has led to many calls for Bader Ginsburg’s replacement to be appointed after the upcoming election in November.

A republican majority in the court so close to the election will strengthen Trump’s right-wing agenda that intends to push back the gains made by our class.

Since her death Bader Ginsburg has been described as an architect of women’s rights.

She was the second of only four women to be appointed to the US supreme court bench. As a lawyer she pushed for legislation against sex discrimination in the 1970s.

These were won by campaigns that were part of the struggles for women’s liberation. The struggle for women’s rights by women themselves meant that those in power had to listen.

Bader Ginsburg continued to do this after her appointment to the Supreme Court by then US president Bill Clinton in 1993.

She said that “Women belong in all places where decisions are being made. It shouldn’t be that women are the exception.”

Yet she is celebrated by liberals and mainstream Democrats in the US as someone who worked within the system rather than fundamentally challenging it.

The legal system is not the way to win fundamental change. Gains made are limited and can easily be rolled back. For instance despite federal law legalising abortion for women 17 states have restricted abortion rights—and these are now under threat.

Legislative rights under capitalism should be celebrated and often come as a result of struggles by ordinary people. But the granting of those rights is not the end of the battle.

The key to defending against the coming attacks on fundamental women’s rights will be resistance by ordinary people not tied to Democratic Party. 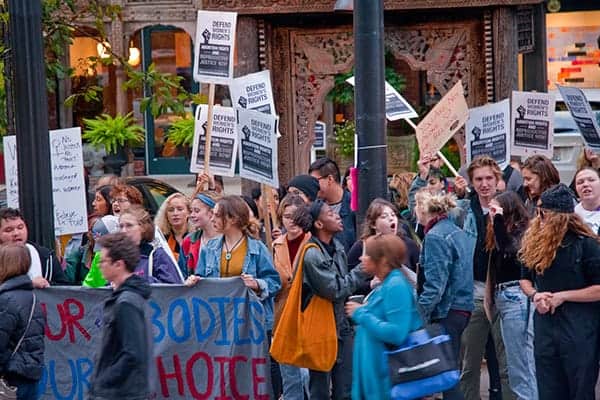