Authors go from words to action

This article is over 18 years, 7 months old
THERE'S AN idea that floats around the world of the arts that being engaged in politics is really rather unpleasant. The Times Literary Supplement describes a new collection of socialist poetry, Red Sky at Night, edited by Adrian Mitchell and Andy Croft, as 'quaint'.
By Mike Rosen
Downloading PDF. Please wait...
Saturday 07 June 2003

THERE’S AN idea that floats around the world of the arts that being engaged in politics is really rather unpleasant. The Times Literary Supplement describes a new collection of socialist poetry, Red Sky at Night, edited by Adrian Mitchell and Andy Croft, as ‘quaint’.

What’s really going on here is a criticism that says, ‘I don’t like your politics. The art I like hasn’t got politics and when my own politics turns up in a piece of art, I don’t notice the politics.’

A ‘nature’ poem like Wordsworth’s ‘Daffodils’ is in reality a sociopolitical plea. The daffodils in question, you may remember, are free and wild. Late 18th and early 19th century Romantic poets like Wordsworth thought contemplation of free and wild things was part of how they could liberate themselves from the constraints of the old French and American pre-revolutionary societies.

All writing gets involved with social and political matters if only by trying to turn its back on it. There’s a late 19th century novel (Against Nature) about a man who retreats into his room creating experiences for himself by the use of clothes, perfume and the like that conjure up journeys and places.

It’s totally non-political in the sense that he ends up non-engaged with society, but that, of course, is the point. He becomes a parody of the withdrawn intellectual thinking that he can avoid contact with the real world whilst trying to bring it into being through the imagination.

Writers for children are often admonished by headlines in the Daily Mail if any of us dare to describe the world as it is.

We are accused of destroying children’s innocence – as if the bloodthirsty verse about Romans, pirates, highwaymen and old sea dogs that I had to learn in the 1950s was so innocent.

Or for that matter, The Wind in the Willows, which recounts the story of how low class stoats and weasels take over a country house only to be violently turfed out when the tough-minded, middle class Badger brings the deposed aristocrat Toad to his senses.

We are living at a time when children’s literature has produced some marvellous writers and illustrators who find ways of dealing with the unequal and unjust world around us. They might do it through the means of the realist novel, picture books, short stories, poetry or whatever. Some of it may be on the level of liberal ideas about the right to be heard, some of it may be more keyed into issues of justice or exploitation.

But this new wave of writing doesn’t go on in some kind of vacuum. Two big events in the last year have drawn writers for children together to take action – the war on Iraq and the imposition of tests in schools.

On Iraq, people who work in children’s literature produced an anti-war petition and letter to the Guardian that attracted hundreds of signatures. Now, Mary Hoffman and Rhiannon Lassiter have edited a book of poems and stories against the war for children – Lines in the Sand.

On SATs, we’ve produced a petition in support of the NUT’s boycott and now we’re building for a boycott ourselves -we’re refusing to allow our writing to be used in the tests.

We’re taking direct action against the whole horrible regime of government-controlled exams. I’ve never felt such a strong sense of people wanting to get involved. 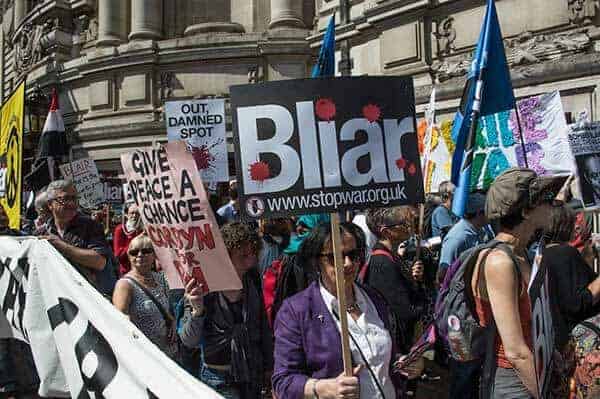 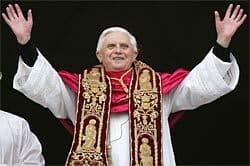 Pope has joined the ‘war on terror’