Bitter defeat of the West’s bloody war in Afghanistan 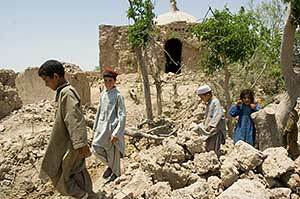 A Nato airstrike killed 147 civilians in the village of Granai (Pic: Guy Smallman)

The West has finally admitted it lost the war in Afghanistan. A coalition led by the world’s greatest superpower is scuttling out of the country. To do so it agreed to talks with the Taliban—the enemy the warmongers said they went in to defeat.

All the talk is of stability and peace. Nothing could be further from the truth. The West’s 12 year occupation leaves devastation, thousands killed and countless more maimed, homeless and impoverished.

The war was spun as going after the Taliban regime for harbouring Osama bin Laden, deemed the mastermind of the 9/11 attacks in the US. In fact the US says a condition of the latest peace talks is that the Taliban break links with Al Qaida.

But the Taliban government was never tied to Al Qaida. After 9/11 it actually offered to hand bin Laden over to another Muslim country so he could be brought to justice. This wasn’t good enough for the US.

They needed to look like they were avenging 9/11. But their real aim was justifying a war in Iraq to topple another former ally, Saddam Hussein.

Osama bin Laden and the Taliban were both products of Western intervention in Afghanistan. The West funded and armed them to help them drive out the Soviet military occupation.

What is often forgotten now is that the Nato-backed invasion of Afghanistan in October 2001 met with very little resistance for almost three years.

The invaders were complacent. US defence secretary Donald Rumsfeld said in 2002 that Afghanistan “is a breathtaking accomplishment”.

There hadn’t been mass popular allegiance to the Taliban government. But resistance grew out of the experience of the Western occupation.

The US’s B52 bombers rained indiscriminate destruction across swathes of the country, just as they had done in Vietnam decades earlier.

The US liked to call everyone who opposed it “Taliban”. But resistance to occupation was not always a centrally coordinated whole. Often local people would join militias to fight back after Western atrocities.

Such was the bitterness against the West that members of Nato’s supposed allies, the Afghan forces, inflicted many casualties on the West in recent years.

The Afghans didn’t have the expensive high tech weaponry available to the West. So far the war has cost over £38 billion.

But they still beat the West to a standstill. British forces suffered over 100 casualties in four years just in Sangin—a town of only 20,000 in Helmand province. This was a third of all their casualties. The US had to take over in 2010.

The military recognised the futility of its strategy, which it coldly referred to as “mowing the lawn”.

They would clear an area of “Taliban” and move on. Then new forces would rise up in response to the actions of West’s troops and the area would be lost to the West once again.

The West has now given up.

Afghanistan was already one of the poorest countries on the globe. And the mass of Afghans have become poorer in the 12 years of war.

There is no reconstruction, there is no women’s liberation. These were never part of the plan, merely the window dressing for imperialist slaughter.

Political stability is an illusion. Afghanistan’s president Karzi is angry with his Western puppeteers. He initially refused even to be a part of the proposed peace talks in Qatar as he perceived the Taliban office there as an alternative embassy.

US secretary of state John Kerry had to appease him.

He promised that the plaque on the door of the building declaring it to be the “Islamic Emirate of Afghanistan” would be unscrewed and the Taliban flag taken down.

The US wants to wash its hands of the bloody conflict in the name of having Afghans talk to Afghans about their future. This is a sick joke when the West has imposed its will on the Afghan people for generations.

We are currently being told the West must intervene in Syria to “help” the Syrian people. The aftermath of the war in Afghanistan shows that there is no such thing as a “good” imperialist war.

Why we should get the troops out now

Winter Soldier: US Iraq veterans testify against their leaders’ war