Blue Labour: dead but not yet buried

This article is over 10 years, 6 months old
When Labour MP Jon Cruddas was asked why he backed Blue Labour—yet another attempt to move the party to the right—he said he wanted to "throw some hand grenades" into the debate.
By Tom Walker
Downloading PDF. Please wait...
Tuesday 26 July 2011

When Labour MP Jon Cruddas was asked why he backed Blue Labour—yet another attempt to move the party to the right—he said he wanted to “throw some hand grenades” into the debate.

Last week one of those grenades blew up in his face.

Maurice Glasman, the project’s intellectual guru, was asked in an interview whether he wanted to ban all immigration. His answer was simple: “yes”.

The Daily Express ran the story on its front page under the headline “Britain must ban migrants”, quoting Glasman approvingly and adding supportive quotes from a hard-right Tory and the anti-immigrant party, UKIP.

Cruddas and others belatedly rushed to distance themselves from Blue Labour. A source “close” to them said, “The Blue Labour brand is now too contaminated.”

This is not the collapse of some marginal group within the party. For months, the whole internal debate about Labour’s future has revolved around the project.

It has managed to unite sections of Labour, right and left, under its banner.

Labour leader Ed Miliband wrote the preface to a book setting out Blue Labour’s ideas, praising their “political energy and intellectual confidence”. And it was Miliband who gave Glasman his peerage in the first place.

Yet Glasman’s was no sudden reactionary outburst. It flowed logically from his theories, and the rotten debate inside Labour.

Much of the party has developed a deep-seated belief that the working class today is a reactionary bloc—and not just on immigration.

Blue Labour was an effort by a group of academics to give these stereotyped workers what they thought they wanted to hear.

Glasman combined folkish rhetoric about “family, faith and the flag” with occasional attacks on finance capital to create what he calls “a deeply conservative socialism”.

In case we still didn’t get the point, he said he wanted to reach out to “those people who support the English Defence League within our party”.

He fitted this into a wider attempt to steal the clothes of the Tories and the far-right.

Glasman has frequently argued, for example, that Labour’s key mistake in government was to create “privilege for people who don’t work”.

Jonathan Rutherford, another leading Blue Labourite, even seriously argued that Labour’s problem was a lack of “manliness”.

This stuff was taken very seriously in Westminster. And it may not be dead yet.

In the depths of the party’s ideological crisis, Blue Labour has been seen as the only show in town intellectually. So the project may be dead, but its policies are very much alive.

It is a politics that thinks the working class voters Labour lost are personified by Gillian Duffy, the Rochdale xenophobe who Gordon Brown called a “bigoted woman”.

After all, the logic goes, the Tories won the election. To beat them surely the only thing to do is to move right and give the people what they want.

But the real reason behind Labour’s defeat is that millions of its working class voters felt the party had abandoned them by embracing neoliberalism and the rich, rather than because they felt it was not racist enough.

Miliband, however, cannot acknowledge this fact. He launched “Refounding Labour” as a grand gesture, saying it would transform the party. But in fact its latest report suggests nothing more than some small tweaks to party structures.

Waiting in the wings are the Blairites and their “Purple Book”, warning him against any move to the left.

Former party general secretary Peter Watt is one among many telling the party to “stop fighting the cuts”—because “fighting them is hurting our electoral prospects”.

But if Ed Miliband wants to give a real lead, it is essential for him to put himself at the forefront of the anti-cuts movement.

Instead of pandering to racism and reaction, Labour should hitch its wagon to the rising resistance. 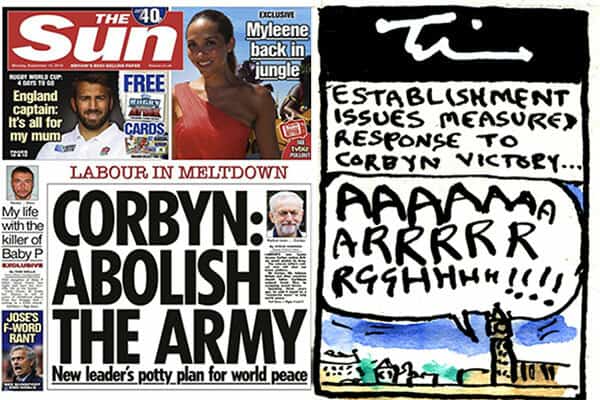