The crisis in Cyprus is dominating headlines worldwide and in Greece. The mainstream media claims that what is at stake is reform of an island economy that relies on “money laundering for the Russian oligarchs”.

Commentators are reproducing this argument from the “Troika”—the International Monetary Fund, the European Union and the European Central Bank.

Apparently it’s legitimate if Russian tycoons invest millions in London’s housing market or football clubs. If, however, they send funds to Cypriot banks, that is a “casino economy”.

In reality, events in Cyprus show up the extent of the crisis in the eurozone and the failure of austerity to stop that crisis.

If the so-called bailouts in Greece, Portugal and Ireland had been successful, bailing out Cyprus would be a piece of cake. Cyprus needs roughly one tenth of the second Greek bailout.

But bailouts have failed. Greece is in its sixth year of recession and Portugal has just been given an extra year to achieve the targets set by the Troika.

This is the real reason that a new approach has been taken in Cyprus—a “bail in”.

So far, rescuing banks has meant imposing cuts on wages, pensions and welfare services to fund the rescue plans. Now the cuts are extended to bank deposits—people’s savings.

No wonder people took to the streets in Nicosia against the plan.

Right wing president Nicos Anastasiades was elected president of Cyprus last month. The governments in Berlin and Paris obviously thought he could impose the deal on a working class demoralised by the electoral defeat of the left.

They were wrong. Workers in Cyprus, as in so many other places, are angry and radicalised.

The image that perhaps best sums up this spirit is a picture of a middle aged couple joining the demonstration outside parliament in Nicosia. Their placards read, “NO” to the eurozone deal and “It is capitalism, stupid”.

This pressure from below forced the Greek Cypriot parliament to reject the “rescue deal” and eurozone officials to restart negotiations.

The Troika and the president are still trying to work out a deal to impose the cuts.

And bank workers in Cyprus are out in the streets demanding a strike against the plans. The left has an opportunity to propose anti-capitalist alternatives to more cuts, more austerity and more poverty.

A programme of cancelling the debt, nationalising the banks and breaking with the euro can find a mass response and offer a way forward.

And yet the established left is hesitating.

AKEL, the Communist Party, ruled Cyprus until a month ago. It is participating in the “Council of Party Political Leaders” that is working with the president in a spirit of national unity. Its leaders claim the protests in the streets support the negotiating position of the country’s president!

The Greek government is scared stiff of “contagion”. Not just of economic contagion, although banks and businesses in Greece are heavily involved in Cyprus. The main fear is that the spirit of revolt will reignite in Greece.

The Troika will return to Athens in early April, demanding mass sackings in the civil service and prolongation of the levy on households.

Prime minister Antonis Samaras is in no position to impose these measures at the moment. However, the radical left Syriza coalition is aligning with AKEL and is seeking allies way to its right.

Alexis Tsipras, leader of Syriza, recently met with Panos Kamenos, leader of the “Independent Greeks”, a breakaway party from the Greek Tories. They agreed to work together.

The Independent Greeks is the only party in parliament that has broken the isolation of the Neo-Nazi Golden Dawn when they put forward together a proposal against financial scandals.

It will be a pity if the opportunities opened by the proud resistance of workers in Cyprus are wasted. 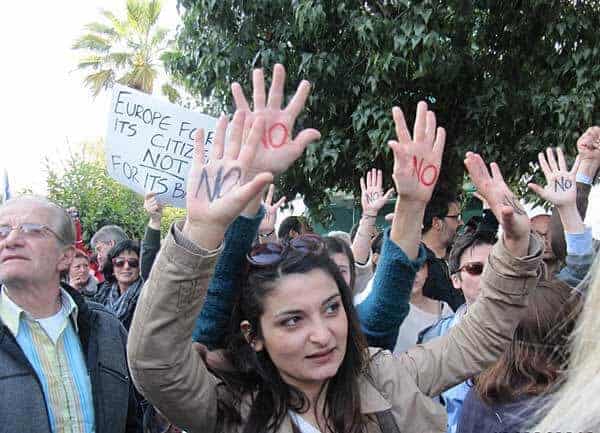 Fury in Cyprus as banks try to snatch savings