This article is over 18 years, 4 months old
Diana Mosley, who died last week, was a particularly unpleasant fossil. Fossils are relics of living things that tell us something about the past. Sometimes what they tell us is so deeply upsetting to the conventional wisdom that people make great efforts to hide it.
By Chris Harman
Downloading PDF. Please wait...
Saturday 23 August 2003

Diana Mosley, who died last week, was a particularly unpleasant fossil. Fossils are relics of living things that tell us something about the past. Sometimes what they tell us is so deeply upsetting to the conventional wisdom that people make great efforts to hide it.

Acres of type were devoted to her life last week. She was, Andrew Roberts told readers of the Daily Telegraph, ‘funny, charming, intelligent, glamorous’. Of course, there was mention of her admiration for Adolf Hitler and her marriage to Britain’s would-be fuhrer Oswald Mosley in top Nazi Goebbels’ house with Hitler as a witness.

This keenness on fascism was treated as an eccentric oddity from 70 years ago. No one said it did not seem such an oddity at the time. That would be to admit that briefly in 1933 and 1934 wide sections of Britain’s ruling class thrilled to the idea of imitating Hitler’s methods. Diana Mosley was a typical product of that class, brought up in the country house of her father, Lord Redesdale.

Her first marriage was into one of the wealthiest families in Britain, the Guinnesses, and she could look forward to a life of luxury cruises, shooting parties and endless self indulgence.

But the great world economic crisis of the early 1930s threatened the wealth that sustained such parasitism. Unemployed riots reawakened the old panic about workers, and even servants, no longer knowing their place. It was then her noxious sister, Unity, got gooey-eyed over Adolf Hitler for showing how to create a murderous movement capable of imposing discipline on the lower orders.

Diana was soon as infatuated with Oswald Mosley, a baronet and son-in-law of a former viceroy of India.

He had swept through the Tory and Labour parties before setting out to build a fascist party of his own. It was the height of fashion in the early months of 1934 for the upper crust to attend his rallies where thousands of uniformed followers gave the Nazi salute.

Lord Rothermere’s Daily Mail proclaimed ‘Hurrah For The Blackshirts’. Among the secret sympathisers was the man who was soon to become King Edward VIII. This was the atmosphere as Diana divorced her husband to marry Mosley. They believed they were destined for immediate glory. It was not to be. British capitalism, still bolstered up by a huge empire, began to recover from the economic crisis.

The upper class fad with British fascism faded as profits rose. The huge anti-fascist demonstration in Cable Street in 1936 blocked the Mosleyite attempt to stir up anti-Jewish feeling in London’s East End.

Diana’s cousin Winston Churchill had once admired Hitler’s way of dealing with the left in Germany. But by 1940 he led the section of the ruling class who saw German power as a threat to the British Empire.

Fearing the Mosleys might aid a German invasion, he shoved them both in prison. He never forgot they came from his own class. They were allowed to live together in a house in the prison grounds, with other prisoners acting as domestic servants.

Oswald Mosley made repeated attempts to build a new political career in the post-war years by unleashing racist agitation. But so long as the ruling class could control the workers’ movement by other means, they did not need him. They preferred to cultivate the lie that fascist methods were foreign to their political culture.

He died in self imposed exile in France in 1980. His wife lived on, an embarrassing reminder to the upper classes that many of them had once looked to the fascist options. It is a pity that hell does not exist for her to rot in. 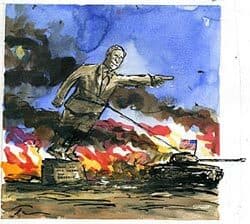 Why we need to get the Nazis out of workplaces

We need more than brave individuals to beat the Nazis