Division at the heart of system

This article is over 18 years, 9 months old
Alex Callinicos on why France, Germany and Russia have opposed the war
Downloading PDF. Please wait...
Saturday 19 April 2003

THERE WERE two major summit meetings last week. The first, highly publicised here, was the meeting of George W Bush and Tony Blair in Northern Ireland. The other brought together the French and Russian presidents – Jacques Chirac and Vladimir Putin – with the German chancellor, Gerhard Schröder, in St Petersburg, Russia.

The St Petersburg summit was transformed by the addition of Chirac from a regular meeting between the Russian and German leaders into a summit of the three most powerful anti-war governments. So far none of the three have shown much sign of repenting their opposition to the war, despite America’s military victory. ‘There can be no lasting international order based on the logic of power,’ Chirac said in St Petersburg.

Chirac, Putin, and Schröder are three of the biggest opportunists in world politics. So why have they taken such a tough line against the war? Chirac is the key figure. On their own, neither Putin nor Schröder could have put up strong resistance to the Bush-Blair line. France, like Britain, still has pretensions to be a global power, and can deliver quite a big military punch.

It also has a permanent seat on the UN Security Council. It was French opposition to the war that turned widespread unhappiness among most of the world’s rulers into something much more cohesive.

So why did Chirac take this stance? Some people emphasise France’s longstanding economic relationship with the Ba’athist regime in Iraq, which dates back to when Chirac was the French prime minister in the mid-1970s. But you could argue that the best way to secure France’s investments in Iraq would have been to go along with the Bush war drive.

A victorious White House that is busy handing out Iraqi contracts to its cronies is hardly likely to do the French ‘surrender monkeys’ any economic favours. Chirac is a Gaullist. Charles de Gaulle, when he was president between 1959 and 1969, sought to build up a French-led Europe as a counterweight to the US, even withdrawing France from the NATO military command.

Both François Mitterrand, French president between 1981 and 1995, and his opponent and successor Chirac were more accommodating to US interests. But they shared the project of building up the European Union (EU) as an economic, political, and even military force capable of dealing with the US on a basis of equality.

The ‘war on terrorism’ threatens this project. It has introduced into the existing EU a pro-US axis led by Blair, Berlusconi, and Aznar. The projected expansion of both the EU and NATO to incorporate East and Central Europe threatens to tilt the balance further in the US’s favour. US defence secretary Donald Rumsfeld made this threat explicit in his famous remarks in January dismissing France and Germany as ‘old Europe. If you look at the entire NATO Europe today, the entire centre of gravity is shifting to the east.’

Chirac was so angry about several East and Central European governments backing a pro-war statement initiated by Aznar that he threatened to block their accession to the EU. There is no sign of him acting on this, but the stakes are high. The Bush war drive threatens to undermine the set-up under which France and Germany have dominated the EU.

Chirac may have decided that the best form of defence is attack. Here his opportunism no doubt played a part. He discovered French opposition to war in Iraq got an extraordinary international resonance. The mantle of leadership of an international coalition against US unilateralism may help Chirac in his fight to maintain Franco-German domination of the EU. And the struggle is likely to continue.

Aside from the question of who the Bush gang decides to attack next, the World Trade Organisation is paralysed by a row between the US and the EU over agricultural subsidies. These splits are important because they deny international legitimacy to the Bush-Blair axis. But we shouldn’t be in any doubt about what’s at stake. For Chirac it’s as much about power and profits as it is for Rumsfeld and the other war criminals in Washington. 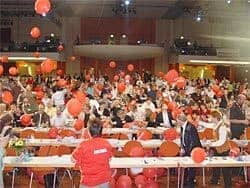