Sexual harassment is very common in Egypt. We have set up organisations to challenge it in Tahrir Square. Statistics say over 99 percent of Egyptian women have been sexually harassed at some point in their lives.

This can be anything from words or groping to rape. Before the revolution harassment by groups of men could be a problem in the streets. This was especially the case on holidays like Eid, when people were out in city squares and parks.

But today group sexual harassment is being used as a weapon against the revolution.

It wasn’t a problem in the early days of the revolution. We saw it for the first time in Tahrir Square in December 2012. Such attacks had peaked during the protests for the revolution’s second anniversary in January. But then there were another 60 attacks in Tahrir during the 30 June protests.

Survivors describe the same tactics. A woman is separated from her friends or family in a crowd. Then a group of men form a circle around her and pull her away. They generally say the same things, “I’m here to protect you. Come to the side. You need to get away from those people over there” and so on.

Yet even as they are saying this other men are taking off the woman’s shoes and clothes, and groping her. This method is common to so many of the attacks. The men often have weapons—knives, electric shockers or even guns. Sometimes the assaults are so brutal that the women need hospitalisation and surgery.

We believe these group attacks are organised. On some big protests there will only be a handful of cases. Then another time there will be a spike of many serious cases.

We don’t know who the men are. Many believe them to be paid thugs, or gangs from the National Democratic Party—people from Hosni Mubarak’s old regime. Some may also be individuals or gangs who now think Tahrir is the place to go to harass women.

Tahrir Bodyguard and Operation Sexual Harassment are groups set up to combat these attacks. They aim to simply get the women away.

There is no time to pinpoint the harassers. Among hundreds of men it is impossible to tell who is an attacker and who might be genuinely trying to help.

And all the time you spend trying to work out who is doing what, the woman is in the centre of the circle suffering. So we get the woman out as fast as possible to a safe place. Then we take her back home or to hospital. We make sure she gets all the support she needs.

Our hotline is only open when we are out in the square. The intervention groups are always made up of both women and men. We wear the same shirt so we can be recognised.

It is vital there are women involved. When a woman is being attacked she doesn’t know who to trust. She needs to see women as part of the group pushing through to rescue her.

When I’ve gone in, you don’t think of it as stopping a sexual assault, it’s more like going into a war zone. The men try to stop you by saying she is my sister or my cousin. You have to ignore them and push in to form a circle around the woman and get her away.

Many of these attacks are attempts to scare women so they won’t take part in the struggle for fear of being sexually assaulted.

But it hasn’t worked. It hasn’t stopped women coming out, because if half of Egyptian society doesn’t take part in the struggle then we have no revolution.

This week Tahrir has been full of women. They were veiled and unveiled, Christian women, and women from all backgrounds and all ages.

This is the way to resist attempts to drive women out of the revolution. Throughout the struggle we have seen women step up. Women have been in the frontline and are not giving up, whether it is in the streets and square or leading strikes in the factories.

Women being central in the struggle is proof that the revolution continues.

Gigi Ibrahim is a member of the Revolutionary Socialists in Cairo
Topics Egypt, Women's Liberation 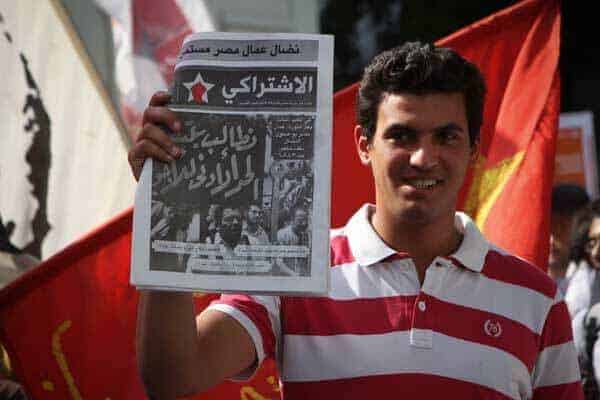