This article is over 10 years, 7 months old
What a year of miracles 2011 is turning out to be. It began with revolutions in Tunisia and Egypt, but has now produced a global day of protest against capitalism. An estimated one million people demonstrated worldwide on 15 October.
By Alex Callinicos
Downloading PDF. Please wait...
Tuesday 18 October 2011

What a year of miracles 2011 is turning out to be. It began with revolutions in Tunisia and Egypt, but has now produced a global day of protest against capitalism. An estimated one million people demonstrated worldwide on 15 October.

The two events are connected. The Arab revolutions—above all the occupation of Tahrir Square—have provided concrete images of collective self-emancipation. They have thereby renewed the very idea of revolution itself.

What we are now seeing around the world are expressions of a will to see Tahrir Square everywhere. The 15 May movement, which occupied squares all over the Spanish state, asserted this will.

The call for a global day of protest on 15 October emerged from that movement. But what made it a reality was the impact of the Occupy Wall Street (OWS) movement in New York.

In some ways, what is happening is reminiscent of how the international movement against capitalist globalisation emerged over a decade ago. Then too a protest in the US—at the World Trade Organisation summit in Seattle in November 1999—had global resonance.

The pace has speeded up, though. The Seattle protests made visible a movement against neoliberalism that had been developing for several years. And it took nearly a year for the first significant European protest to take place, at the International Monetary Fund meeting in Prague in September 2000.

But if one looks at the US one can see marked similarities in the two situations. Then, as now, there was a Democratic president in office, confronting a right wing Republican opposition in the Congress. Bill Clinton, like Barack Obama, had betrayed the hopes of real change his election had raised on the US left.

The biggest difference is that the situation is much worse now. The Republican right today, driven as it is by the Tea Party movement, is much more rabid than it was during the 1990s. And the US economy was booming then, while now it is stagnating after a deep slump.

No doubt the global economic crisis helps to explain the speeded up response. And we should also acknowledge the role that Facebook and other social media play in transmitting the examples around the world.

But one shouldn’t lose sight of the significance of the Arab revolutions. In the late 1990s, the dominant image of revolution was provided by the fall of the Stalinist regimes, when popular revolts produced pro-Western neoliberal regimes.

Now we have Tahrir Square, symbol of a rising against one the US’s closest allies in the Middle East. Yet it is worth stressing that Tahrir was the tip of an iceberg. The reality of the Egyptian Revolution is much more complex.

The revolt against Hosni Mubarak was much more intense, and more violent, in other cities—for example in Alexandria and Port Said. And the fate of the revolution remains open, as a variety of progressive political and social forces contend with a military regime that has exposed its willingness to use sectarian pogroms to hang onto power.

The outcome of this conflict will depend on how the vast mass of Egyptians—workers, peasants, urban poor—move politically. But this, of course, isn’t just a uniquely Egyptian moral.

What is possible is a confluence between the street-based protest movements that have exploded over the past year and the organised working class. The support that OWS has won from New York unions is an extremely positive sign.

But Slavoj Zizek was absolutely right when he spoke to OWS protesters recently. He told them not to get caught up in the euphoria of the moment and to think about how they could continue the struggle on a much broader social terrain:

“Don’t fall in love with yourselves, with the nice time we are having here. Carnivals come cheap—the true test of their worth is what remains the day after, how our normal daily life will be changed. Fall in love with hard and patient work—we are the beginning, not the end.” 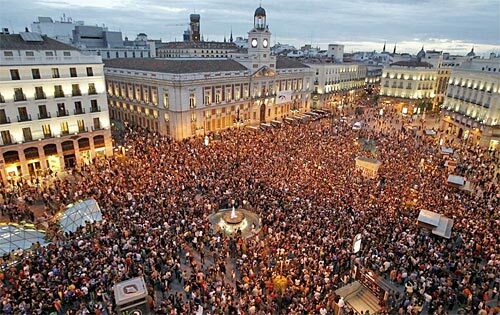