Genie at large in Macedonia

This article is over 20 years, 10 months old
The other day I heard George Robertson, secretary general of NATO and British defence secretary during the 1999 Balkan War, say, \"We didn't wage war over Kosovo in order to replace ethnic cleansing by Serbs with ethic cleansing by Albanians.\"
By Alex Callinicos
Downloading PDF. Please wait...
Saturday 10 March 2001

The other day I heard George Robertson, secretary general of NATO and British defence secretary during the 1999 Balkan War, say, ‘We didn’t wage war over Kosovo in order to replace ethnic cleansing by Serbs with ethic cleansing by Albanians.’

But that’s precisely what NATO has done. Since its occupation army, K-For, took control of Kosovo in June 1999, leaders of the Albanian nationalist Kosovo Liberation Army (KLA) have been waging a reign of terror against the Serbian minority. Landmines caused carnage in a Serbian convoy three weeks ago.

Now the bloodshed is threatening to spread throughout the region. Macedonia closed its border with Kosovo last Sunday after three soldiers were killed. Some 30 percent of the population of Macedonia are Albanian. When the present round of Balkan wars started in the early 1990s, the US was so worried about them spreading to Macedonia that it placed troops on its border with Kosovo and Serbia.

Then the threat came from Slobodan Milosevic’s Serb nationalist regime. Now its source is the KLA leadership, who want to carve out a Greater Albania from Albania, Kosovo, and parts of southern Serbia, Macedonia, and Greece. An Albanian guerrilla group called the UCPMB has been waging a campaign in the Presevo Valley in southern Serbia for some time.

Now another group, called the National Liberation Army (NLA), has started operations in Macedonia. One NLA guerrilla told the Guardian, ‘It is going to explode everywhere. We have the same command structure as the Kosovo Liberation Army, and units across Macedonia.’

These Albanian guerrilla campaigns have been allowed to flourish in part because they operate in zones for which the US is responsible. The Guardian reports:

‘Although [US] troops are theoretically responsible for patrolling the frontier with Macedonia, it has imposed a one-mile exclusion zone to prevent them straying across the border. It has also effectively given the NLA the freedom to go in and out of Kosovo.’

But the problem that the Albanian nationalist leaders now face is that, since the overthrow of Milosevic, the Western powers are seeking improved relations with the new Yugoslav regime under Vojislav Kostunica. Serbia still retains formal sovereignty over Kosovo.

According to US security consultants Stratfor, ‘The United States wants to settle the Kosovo problem peacefully and, more importantly, to integrate Yugoslavia into a programme for long term regional stability.’ This doesn’t suit the Albanian nationalist leaders at all-they can only hope to achieve a Greater Albania with Western support.

According to Stratfor, ‘The primary motive behind the militants’ campaign in the Presevo Valley is the desire to provoke a harsh Serbian response and thus damage relations between the new Yugoslav government and K-For. ‘It is an attempt to preclude any chance of returning Kosovo to Yugoslav control.’

This strategy backfired. Kostunica held his troops back, and NATO foreign ministers agreed last week to reduce the size of the demilitarised zone separating Serbia and Kosovo in order to make it easier for Serb forces to block UCPMB infiltration.

It looks as if the Albanian nationalist response has been to open another front in Macedonia. The NLA seized a Macedonian border village last week. This may also have been a response to the border treaty signed by the Yugoslav and Macedonian presidents at a Balkans summit last week.

Improved relations among existing states is an obstacle to Albanian nationalist hopes of tearing up most of the borders in most of the region. There is also trouble in another of NATO’s Balkan protectorates, Bosnia. Last week the Bosnian Croat leader Ante Jelavic announced that he no longer recognises the government of the Muslim-Croat Federation.

Under the 1995 Dayton agreement Bosnia was partitioned along ethnic lines between the Muslim-Croat Federation and the Serbian Republika Srpska. Now this arrangement threatens to unravel because the Croat nationalists, despite being allied to the Muslims in the final phase of the Bosnian war, feel they don’t have a big enough share of the cake.

All this is entirely predictable. Indeed, it was predicted by the opponents of Western intervention. We warned that by first helping to bring about the collapse of Yugoslavia, and then backing Croat and Albanian nationalism as a counterweight to Milosevic, the Western powers were condemning the Balkans to a future of ethnic wars. Now the US and its allies are trying to put the genie back in the bottle. They won’t find it easy. 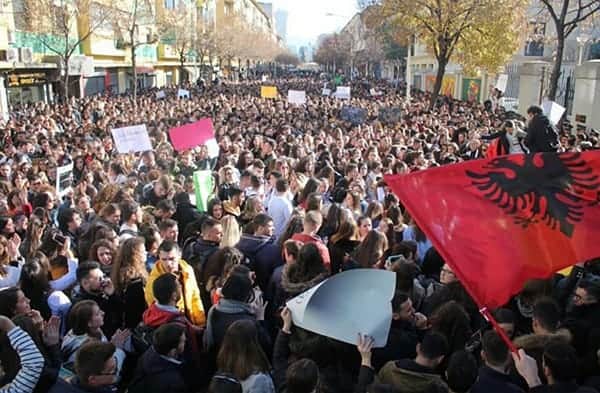