Many facts and statistics about Glasgow East have been bandied about over the last few weeks since the by-election was announced.

There’s been a dispute about whether male life expectancy in the constituency is lower than that of Palestine’s Gaza Strip or Africa’s Gambia.

What’s not in dispute is that in 2002 a United Nations rating system – which considered life expectancy, unemployment, health and income – put the old Shettleston constituency, which forms part of today’s Glasgow East, as the most deprived area in Britain.

Unemployment for men over 25 is 10 percent while for women it is 25 percent – twice the national average.

The east of Glasgow was a centre of heavy industry for over a hundred years.

Now all the major employers have closed down leaving the area littered with derelict sites and a few retail parks.

Perhaps the most symbolic is the Parkhead Forge shopping centre, so-called because it stands on the site of what was one of the biggest steel works in Europe, employing over 30,000 at its peak.

It closed in 1975 followed by Templeton carpet works in 1979 and Arrol’s engineering in 1986. Along with them went hundreds of smaller suppliers.

Both Labour and the Scottish National Party (SNP) are backing the idea that an extension to the M74 ­motorway – which will cut through the south of the area – will bring regeneration.

But as local doctor Peter Cawston said in a letter to the Scottish Executive, “Some of the areas through which this motorway is to be built already have among the worst health in western Europe.

“We desperately need a healthier environment for Glasgow’s citizens. It makes no sense to spend more than the cost of the Scottish parliament on five miles of motorway.

The Commonwealth Games, which is coming to Glasgow in 2014, is also being touted as a major boost to the area.

But the “benefits” in terms of housing will be that out of 1,500 new homes built for the games, only 300 will end up as social housing.

The SNP hopes to benefit from the years of Labour’s neglect.

But if Labour does lose it will not be because of any enthusiasm for nationalism in Glasgow East, but a protest against being ignored and taken for granted for decades.

I live in a tower block in the Calton area of the constituency. It is a very run down area. The biggest problem is housing – Labour sold it all off a few years ago but there’s still no money coming here.

The tower blocks are in really bad condition and repairs can take ages.

There was a guy in my block whose window blew in. He came to stay with me while waiting for it to be fixed. He was at mine for weeks!

There’s a lot of drinking, drugs and violence around here. Someone was stabbed in my hallway just the other week. The kids are forced to play round the tower blocks because there’s nowhere else for them to go.

This is not really somewhere you’d want to bring up kids, but people don’t have a choice. There’s no facilities and nothing to do for entertainment.

One thing that would improve the area is to fund a proper community centre. There used to be one nearby but it’s bricked up now.

I don’t know whether people will bother with the election or not. Labour certainly haven’t done anything for people in this area.

I work with adults with learning disabilities in the Dalmarnock area of the East End and I’m disgruntled with Labour.

They seem to have thrown all their eggs into one basket with the Commonwealth Games. But the games are not going to make life much better for most people here.

This is a very deprived area. Lots of people are in poorly paid jobs or out of work.

Many people I work with are on disability benefits. One of Labour’s big pushes is to get people off them and into work.

We are under a lot of pressure to get service users into work – whether it’s a suitable job doesn’t seem to matter.

The by-election has big implications. If Labour lost, it would have to take notice. The SNP seems to have a strong campaign – but I don’t think they’re much good either.

We would need something much more radical to transform this area.

She says, “Deprivation in here could be solved by a fraction of the cost of the unjust wars and the £100 billion Labour are spending on renewing Trident.”

Nan Agnew, a one‑time Labour activist who has lived in Easterhouse for the past ten years is giving her backing to Solidarity.

She says, “There has been some money put into the area but it is a drop in the ocean against the magnitude of the problem.”

Shivers down the backbone 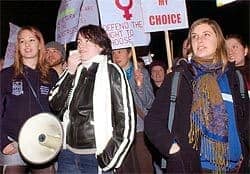