High stakes for US over Iraq

This article is over 19 years, 1 months old
IN THE aftermath of the United Nations Security Council resolution authorising the return of weapons inspectors to Iraq, many people have deluded themselves that this makes war less likely. Even Richard Perle, the ultra right wing adviser to the Pentagon, argued on BBC News 24 last Sunday that the aim of Bush's administration was no longer \"regime change\" in Iraq but the removal of Saddam Hussein's weapons of mass destruction. This apparent shift in US objectives may only be a figleaf covering the administration's real intentions.
Downloading PDF. Please wait...
Saturday 23 November 2002

IN THE aftermath of the United Nations Security Council resolution authorising the return of weapons inspectors to Iraq, many people have deluded themselves that this makes war less likely. Even Richard Perle, the ultra right wing adviser to the Pentagon, argued on BBC News 24 last Sunday that the aim of Bush’s administration was no longer ‘regime change’ in Iraq but the removal of Saddam Hussein’s weapons of mass destruction. This apparent shift in US objectives may only be a figleaf covering the administration’s real intentions.

Perle made it clear that he wouldn’t believe an inspectors’ report that declared Saddam had no weapons of mass destruction. But say Saddam were somehow to survive? Last week Moises Naim, editor of Foreign Policy magazine (which is linked to the right wing Carnegie Endowment), wrote an article in the Financial Times. He said, ‘Senior US officials admit that not much thinking has gone into how to manage the aftermath of a process where Mr Hussein stays in power.’

Naim went on to list the negative consequences – from the point of view of Bush and his advisers – that such a scenario would involve.

In the first place, if the claims so insistently made by both Washington and London are correct, Saddam would presumably remain ‘a permanent and undeterrable threat to regional stability and international security. Second, if Mr Hussein without much oil money was dangerous and undeterrable, what would he be like with a lot of oil money? Once it became clear that the Iraqi regime had complied with the UN demands, the pressure to lift the economic sanctions that have constrained Iraq’s oil exports and international trade would be enormous. Other Arab countries, multinational corporations eager to do business with Iraq, and humanitarian groups that have long argued that the sanctions hurt innocent civilians would step up their demands for lifting or relaxing them. On what grounds could the UN refuse to relax the sanctions if Iraq satisfied the conditions set by the Security Council? The US might choose to keep them in place, but other countries would surely liberalise their trade and investment with Iraq, thus boosting its economy. A year from now, a disarmed and closely watched Iraq might be a lesser security threat but, freed from sanctions, it would surely be on its way to becoming a significant economic factor in the region and in the global energy picture. Instead of counting Scud missiles Mr Hussein may end up spending his time counting the business deals coming his way.’

Such an outcome would be a very serious setback for the global strategy of the Bush administration. In this month’s issue of Le Monde Diplomatique Michael Klare stresses the connections between Washington’s energy and military policies. Soon after Bush’s entry to the White House, vice-president Dick Cheney presided over an energy review that stressed the US’s growing long term dependence on oil imported from politically unstable regions like the Middle East and Central Asia.

As Klare puts it, ‘An energy policy aiming to allow the United States to gain access to oil reserves situated in chronically unstable regions is only realistic to the extent that the United States is capable of projecting its military power in these regions.’

If, after much huffing and puffing by Bush and Blair and the deployment of no less than four carrier battle groups, Saddam is left in control of the world’s second largest oil reserves this will be a huge blow for US policy.

Moreover, as Naim points out in the Financial Times, ‘The international prestige of the US as well as that of Mr Bush would suffer. ‘The symbolism of a Mr Hussein who emerged from a massive American effort to oust him weakened and disarmed but still in power would not go unnoticed among critics and enemies of the US, particularly among the more thuggish ones, who might be emboldened by this outcome.’

Finally, Naim notes, the uncertainty about war in Iraq that ‘has been a drag on the world economy for months’ would continue ‘because consumers and investors will not quickly shed the belief that regime change is the only outcome acceptable to Mr Bush. ‘Markets will continue to wait for war and, in the process, further slow down an already frail economy.’

Naim may be over-egging the cake a bit here. Correctly anticipating the interactions between political events, oil prices and financial markets is very hard. But the basic picture he paints is surely correct. Saddam’s survival would cause enormous damage to both the global strategy and the political standing of the Bush administration. For that reason alone, I would bet on an Anglo-American war on Iraq this winter.

Revolutionary Ideas of Karl Marx by Alex Callinicos. Invaluable introduction to the great anti-capitalist and socialist £5.50 from Bookmarks Phone 020 7637 1848 or buy online from www.bookmarks.uk.com

Why does Blair stand by his man? 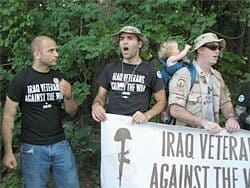