This article is over 7 years, 0 months old
Ken Olende cuts through our rulers’ attempts to spin the Magna Carta as the basis of democratic rights in Britain
Downloading PDF. Please wait...
Tuesday 09 June 2015

The Magna Carta’s promise of justice for all “free men” excluded the majority of Medieval England’s population, which was anything but free.

Our rulers’ celebrate the “Great Charter” as the basis of freedom in order to push the idea that Britain became a democracy through legal changes.

In reality, change was won through rebellion and civil war.

The Magna Carta came out of a feudal barons’ revolt against king John 800 years ago in 1215. They were furious about paying taxes to fund the king’s wars in France. On 15 June, the lords forced the king to agree to a document limiting his power.

It quotes the charter’s most famous clause, “No free man shall be seized or imprisoned…except by the lawful judgement of his equals or by the law of the land.”

This is an important right, but it did not apply to more than 85 percent of men who were not “free”. The only mention of women in the charter concerns inheritance rights for the aristocracy.

Most of the population were “serfs” or “villeins”, who were attached to their feudal lord. Only a tiny number of peasants—mostly “sokemen” tenants—were regarded as “free” and got the benefits. The section quoted is clause 39. It comes after many clauses defending the privileges of the rich.

Even the Daily Telegraph newspaper has pointed out that the charter “offered special legal protection for the Catholic Church and the aristocracy, advocated tax breaks for the wealthiest, and freed the City of London from regulatory oversight.”

King John dropped it six months later. It was only brought back to gain support for the disputed succession of his son Henry III.

In general the charter’s details became less and less relevant as subsequent kings revised it. But in 1354 “no free man” was replaced with “no man of whatever estate or condition he may be”.

England was not a static society at this time. Feudal lords had governed self-contained economies.

But by the 13th century trade was spreading and towns were growing. These changes made kings more influential and encroached on the lords’ power.

Magna Carta’s restrictions on kingly power came as part of this dispute.

But other events in the late Middle Ages played a bigger role in winning freedoms for the majority of people.

These even included the Black Death in 1348. It wiped out up to half the population, yet the subsequent labour shortage put surviving peasants in a much stronger position to demand improved rights.

The other was the Peasants’ Revolt of 1381—also sparked by heavy taxation. When the peasant leader Wat Tyler met the king he made real democratic demands.

He argued that “there should be no more villeins in England, and no serfdom or villeinage, but that all men should be free and of one condition.”

While this revolt was savagely put down, fear of another was key in getting the ruling class to accept the end of serfdom.

So Magna Carta was not a document that defined society, but that reflected bigger changes in society. 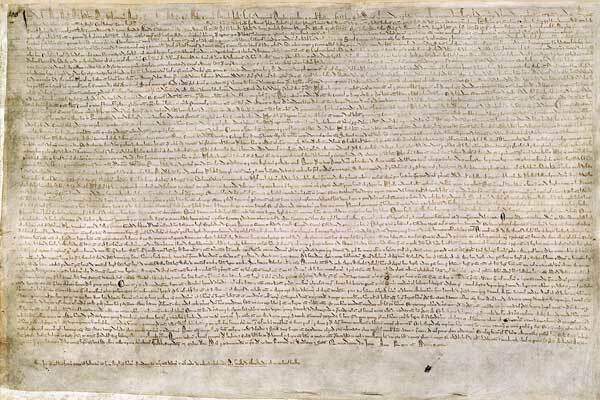 The Magna Carta and the struggle for our legal rights