This article is over 21 years, 6 months old
Any day now I'm expecting someone in the culture business to tell us that history is the new rock & roll. It's everywhere. One moment it's Simon Schama in his History of Britain series, standing on the battlements, the next it's Tony Robinson and the Time Team in a ditch.
Downloading PDF. Please wait...
Saturday 13 January 2001

Any day now I’m expecting someone in the culture business to tell us that history is the new rock & roll. It’s everywhere. One moment it’s Simon Schama in his History of Britain series, standing on the battlements, the next it’s Tony Robinson and the Time Team in a ditch.

On the History Channel they rerun the Second World War at least five times a week. What are we to make of all this? On the positive side, I figure there must be a genuine curiosity about origins. It is quite possible to get through most days without ever wondering how come it’s you living in, say, Edinburgh in a tenement, speaking English and eating Italian food. Or, for that matter, living in Italy speaking German and eating French food, and so on.

But then sometimes history comes along and hits you in the face. A Jamaican colleague of mine discovered that she had a 100 year old Jewish grandfather living in a treehouse in Jamaica. That sort of thing can make you curious. And you can’t totally block out kings and queens.

No matter how fervently republican you are (and I am), the mere mention of that person called the queen hooks into a long line of tyrants, imbeciles, demons and dozos. Which leads us to Simon Schama. I’m suspicious of Schama. He’s no fool. He knows history is not made by monarchs.

He knows that even if you focus on monarchs the fact is that their power, their will and their chances to act are created and constrained by forces bigger than them. But his story of history was one of kings and queens ‘deciding’ to do this or that, waging war on this or that nation, or, in the case of his darling Elizabeth I, ‘uniting’ the nation. So what was his game?

I think there was a hidden agenda. Part of New Labour’s line on patriotism is that we all need a bit of flag-waving. It’s all very well for beardy little academics coming up with stuff about the history of syphilis or the history of working class girl truants but none of that stuff unites us, does it? Schama, I think, was paid enough money to tell the old lie that we, the people, hang like clothes on a line that runs from the Saxons to Prince William. Schama did show that this wasn’t all glorious. The acts of treachery and barbarism, I admit, did amaze me. Those Edwards (or, I should say, their armies!) massacring the Welsh and Scots was staggering.

But this is just low cunning. This way Schama avoids the accusation of being a glory boy, while he plays the national anthem. Tony Robinson’s Time Team should in theory offer an alternative. He promises to tell us how ‘ordinary people lived their lives’. But my heart sank when his Christmas show wheeled out some of the great tired lies of history.

‘The Romans brought law and order.’ Yes, they brought slaves with them in order to colonise, enslave and exploit others. Nice law and order. But as the team excitedly unearthed a 13th century basement, what did they really find? Yes, 13th century walls were damp, but where are the hopes and struggles and desires of the people who lived there?

Where are their realisations about how they lived, about how they might have lived and about the world and society they found themselves in? You won’t get that from Simon Schama unless they wear a crown or stand within stabbing distance of a throne.

Why Inequality Matters demands a narrowing of the wealth gap 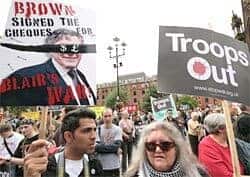 Writing some wrongs on Iraq

An urgent fight to stop the Nazi BNP