Policies are cause of Labour’s unpopularity

This article is over 12 years, 7 months old
The knives were out for Gordon Brown even before the results of this week’s European and local elections were known.
By Chris Bambery
Downloading PDF. Please wait...
Tuesday 02 June 2009

The knives were out for Gordon Brown even before the results of this week’s European and local elections were known.

His response seems to be to bury his head in the sand.

Astoundingly he claimed this week that the measures the government was taking to get Britain out of its worst recession since the Second World War were “starting to have some effect”.

This will be news for the growing number of workers facing redundancy, lay offs and pay cuts.

Brown’s government is failing to stem the impact of the recession on ordinary people. This is not only seen in the unemployment figures.

The Rowntree Trust reported this week that Brown’s pledge to eradicate child poverty across Britain by 2020 was “set to fail”.

Faced with an electoral calamity the prime minister’s cabinet “colleagues” were elbowing each other aside in a rush to present themselves as his successor.

Alan Johnson, the health secretary, got his retaliation in first by making a call for electoral reform and calling for the introduction of proportional representation for general elections.

His article was not checked with Brown.

Johnson was closely followed by work and pensions secretary James Purnell while foreign secretary David Miliband was due to set out his stall with a speech later in the week.

Brown seems to believe a ceaseless flow of policy statements, which few believe he will implement, and a cabinet ­reshuffle can rescue him.

So Lord Mandelson, the minister in charge of post office privatisation, is being touted for promotion to foreign secretary.

This is the same Mandelson who this week announced that he has put on hold plans to allow fathers six month’s paternity leave.

He said, “It is only right that in tough economic times we look afresh at the costs and benefits of new regulations.”

Other names mentioned for promotion are Ed Balls and Yvette Cooper, despite the fact that they are embroiled in the expenses scandal.

Balls is being tipped to replace Alistair Darling as chancellor.

Shuffling around people who are up to their necks in corruption will not boost Labour’s popularity.

Paul Kenny, the general secretary of the GMB union, has said he would be “shocked” if at least 50 Labour MPs were not forced to stand down before the general election because of the expenses scandal.

The question his members might ask is whether he has stopped union funding for MPs caught with their hands in our till.

The infighting within Labour is a reflection of the disgust that voters feel towards the party – over both the expenses crisis and the fact that Labour expects workers to pay for this recession.

No Labour minister will address those concerns.

US and China in a battle for influence 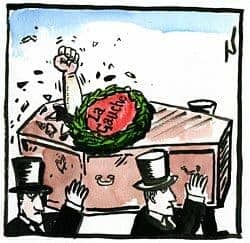