Pregnant in Ireland? The state owns your body

The Irish state was compelled to introduce limited abortion legislation in 2012 and give women the right to abortion if their life was at risk.

This followed an outcry over the death of Savita Halappanavar, a 31 year old woman who died after being refused a life-saving abortion in Ireland.

The story of the first woman who tried to access abortion under the new legislation came to light last weekend. Her treatment can only be described as barbaric, even by Ireland’s low standards.

Due to reporting restrictions we do not know the full facts of the case.

But here is what we do know. A young woman had been raped and was unable to travel abroad freely because of her immigration status. She discovered she was pregnant at eight weeks.

The woman immediately sought an abortion under the new legislation, as there was a high risk she would kill herself.

The legislation requires that a woman requesting an abortion must be interrogated by a panel of three doctors.

Politicians insisted on this clause in the deeply flawed legislation. They decided it was necessary to determine if a woman was “really” suicidal or just “faking” it to get an abortion.

The panel all agreed that she was at risk of suicide and therefore legally entitled to an abortion.

However, it is what happened next that brought Ireland’s barbaric abortion laws to a new extreme.

After repeatedly delaying the decision, the doctors decided that they wouldn’t perform an abortion.

Instead they would perform a caesarian section once the foetus was deemed to be viable. On learning of this decision the young woman went on an immediate hunger and thirst strike, begging the doctors to perform an abortion.

They responded by securing an order from the High Court allowing them to effectively force-feed her.

During the legal proceedings the foetus was given its own independent legal representation.

When the woman refused to consent to the caesarian, the doctors returned to the High Court to get another order forcing her to comply.

The woman later, presumably under extreme duress, allowed the doctors to perform the caesarian. The baby was born at between 25 and 26 weeks and taken into care by the state.

This case is particularly shocking and horrific. But sadly, it is not surprising. This is the reality of abortion law in Ireland.

The so-called Eighth Amendment to the Irish Constitution equates the life of a pregnant woman with that of a foetus.

In practice these 43 words mean that legally a foetus is an independent entity. Its rights must be protected regardless of the risk to the life, health and well being of the pregnant woman.

It means you can force a raped, suicidal woman on hunger strike and begging for an abortion to continue a pregnancy until it is viable. Then you can force her to undergo a caesarian section.

The chair of the United Nations Human Rights committee said last month that Irish abortion law treats women as a “vessel and nothing more”. That is no surprise.

If you live in Ireland, if you are pregnant, and particularly if you are poor and vulnerable, your body is the property of the Irish state.

The eighth amendment has been present in the Irish constitution for over three decades. But a dramatic shift in attitudes on abortion has taken place during that time.

Today over 87 percent of the population support more liberal abortion laws. More significantly, a new generation of pro-choice activists has been politicised to fight to repeal this amendment and demand free, safe and legal abortion.

Sinéad Kennedy is an abortion rights activist with Action for Choice and the Coalition to Repeal the Eighth Amendment
Topics Abortion Rights, Ireland 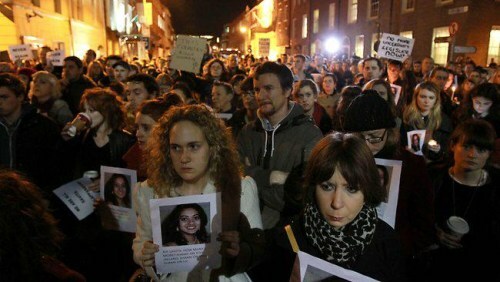 No real choice on abortion in Ireland