Rapidly running out of friends

‘BLAIR’S REFORMING reshuffle,’ read the Guardian’s headline on Friday last week. How naive can you get? In the first place, the post of Lord Chancellor is undoubtedly an outdated hangover from an earlier era.

All the same, it has become clear since the reshuffle that Derry Irvine was sacked by his old friend Tony Blair because David Blunkett saw him as an obstacle to his plans to force the judges to send yet more people to Britain’s already overcrowded prisons. Despite all the fuss about the new Department of Constitutional Affairs, control over criminal justice remains in the hands of the deeply reactionary Home Office.

In charge of the new department is yet another unelected Blair crony, Lord Falconer, who Blunkett pushed for the job. Secondly, the real story of the reshuffle is Blair’s increasing weakness. He couldn’t overcome Blunkett’s opposition to the creation of a ministry of justice or Jack Straw’s resistance to the appointment of a cabinet-level minister for Europe.

Observer columnist Andrew Rawnsley, normally sympathetic to Blair, commented, ‘Rather than having his colleagues at his mercy, he increasingly looks like a prime minister at the mercy of his colleagues.’ The most obvious example of this is Blair’s failure to persuade Alan Milburn to stay on as health secretary.

Back in 1997, Milburn, along with Peter Mandelson and Stephen Byers, formed a ‘shock troop battalion’ of ultra-Blairite MPs holding, like Blair himself, safe seats in the north east, stronghold of the old right wing Labour machine. Hurts Mandelson long ago disappeared amid a cloud of scandal. Byers was forced out after a disastrous tenure at the Department of Transport.

Interestingly, since his return to the backbenches Byers has distanced himself from Blairite orthodoxy. The man who led the British delegation to the notorious 1999 World Trade Organisation summit in Seattle now accepts that free trade hurts the poor. That left Milburn aggressively to drive through the free market agenda in the NHS. But now – after waging a bruising battle for foundation hospitals – he’s gone too.

It doesn’t really matter whether or not we believe Milburn’s touching effusions about spending more time with his family. What matters is his departure, which leaves Blair increasingly isolated. Blair is now heavily reliant for his senior ministers on figures such as Charles Clarke, Patricia Hewitt and John Reid, many of them veterans of the student left who owe their rise in the Labour Party not to him, but to Neil Kinnock.

Then there is Gordon Brown, who seems more powerful than ever. Ignore the froth about Milburn’s love of his family and look at the facts. Milburn clashed with Brown over foundation hospitals, and now he’s gone. The key date we need to keep in mind here is 18 March, when the House of Commons voted for war on Iraq.

It’s quite probable that a majority of Labour MPs would have voted against Blair had Brown not worked hard to swing enough gullible backbenchers into the pro-war camp. This is not to speak of Clare Short, who now goes round announcing with an air of surprised discovery what was in fact well known back in March. So Blair owes Brown. More than that, he wants to take Britain into the euro. He hasn’t a hope in hell of winning a referendum on the euro without Brown’s support.

Meanwhile, Brown wants Blair’s backing to succeed him as prime minister. So, however much they may hate and brief against each other, the two are still bound together, the odd dysfunctional couple that dominates this government. Where does this leave Blair? Andy McSmith, a shrewd observer of the Labour Party, commented in the Independent on Sunday, ‘The prime minister may now be holed below the waterline, because in the British political system, any head of government, however dominant, has to have a secure base in parliament. ‘Mr Blair’s parliamentary base is slowly, inexorably slipping away, and it is hard to see how he can repair it.’

We should remember Margaret Thatcher. Like Blair, she trod the world stage commandingly, and enjoyed large majorities in the House of Commons. Then, all of a sudden, bereft of support on the backbenches and in the cabinet, she was gone.

The poll tax brought down Thatcher. Ultimately it will be Iraq that gets Blair. Already he has been exposed as lying and bullying his way into an unjust war that is still far from won. Sooner or later his crimes will seek him out. 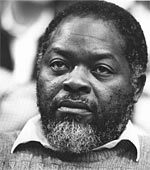 Why no outcry from black leaders as police target black males round Notting Hill?