SNP betrayal over Nato shows up the limits of its nationalism

This article is over 9 years, 5 months old
An independent Scotland would remain part of Nato, the leadership of the Scottish National Party (SNP) recently announced. This reversal of party policy marks a significant moment for the SNP—and for the debate on Scottish independence more generally.
By Angela McCormick
Downloading PDF. Please wait...
Tuesday 21 August 2012

An independent Scotland would remain part of Nato, the leadership of the Scottish National Party (SNP) recently announced. This reversal of party policy marks a significant moment for the SNP—and for the debate on Scottish independence more generally.

Nato is a nuclear alliance of 28 countries, dominated by the US. It was formed in 1949 at the height of the Cold War, but its role has since expanded. Today it coordinates the US’s murderous war in Afghanistan.

Britain’s contribution to Nato includes its Trident nuclear weapons system. This is based in Faslane in western Scotland. Many fear that attempts to remove these weapons of mass destruction would be blocked if Scotland remained within Nato.

The decision to support continued Nato membership is a major retreat from a stance that has drawn the SNP much support over the years.

The party has built up a name for itself over the past decade as a mainstream social democratic party that was nevertheless anti-war and anti-Trident.

This has proved popular with working class voters. Many see Labour as the party of war, one that supports nuclear weapons on the Clyde and presides over councils that make savage cuts. The SNP, in contrast, seemed to have something different to offer.

So on economic policy, the SNP government portrays itself as being bound by Westminster’s austerity programme. But on health—which is a devolved issue—the SNP introduced free prescriptions.

For many on the left this implied that things could be significantly better in an independent Scotland with an SNP government wielding power over policy areas it currently cannot control.

The recent U-turn around Nato will create huge anger among those who joined or voted for the SNP because of its anti-war position. Many SNP members are opposed to nuclear weapons, and see anti-nuclear policy has something that defines the SNP.

There have already been protests and lobbies of the SNP, with more planned—including one outside the party’s annual conference in October where the issue will be debated.

The SNP’s Campaign for Nuclear Disarmament (CND) group is set to meet this weekend and has issued a statement detailing the arguments against Nato. “Nato is a roadblock to a nuclear weapons free world,” it says, underlining the link between Nato and nuclear weapons.

But removal of Trident and opposition to nuclear weapons are also key issues in the wider independence debate. The question of Nato membership goes to the heart of the debate on what kind of Scotland we want to see.

As socialists we should welcome the break up of the British state and the weakening of its imperialist role in the world.

The referendum over Scottish independence provides us with an opportunity to argue for a break with the warmongering of successive British governments. We want the billions wasted to be redirected to health, welfare and education.

The move to remain in Nato exposes the faultlines in the SNP leadership’s apparent commitment to just society and social democratic values. It points to further retreats as big business and imperialist interests continue to hold sway in an independent Scotland.

Socialists need to campaign alongside anti-nuclear and peace activists to ensure that opposition to Nato remains part of SNP policy.

But this moment sheds light on the limits of an independent Scotland under a capitalist SNP government. As we enter the referendum debate, it shows why we need a movement from below on all the issues that affect working class people.

Angela McCormick is a Socialist Workers Party member in Glasgow

The personality is political 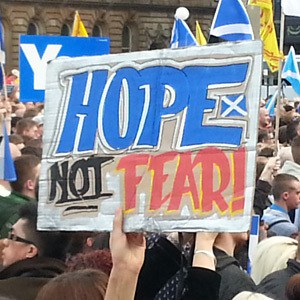 Why did they dump Tommy Sheridan?