This article is over 13 years, 6 months old
Leila Assaf – 16, east London ‘People usually carry knives for protection. I live in Hackney, east London, which is quite a rough area. So all my friends have got knives.
Downloading PDF. Please wait...
Tuesday 08 July 2008

‘People usually carry knives for protection. I live in Hackney, east London, which is quite a rough area. So all my friends have got knives.

They feel that if everyone else has got one then they’ll need one in case they get into a fight. But people are more worried and angry about the police than anything else. I hate it with so many police around.

The other day the police came on our bus and started searching everyone. I got fined £20 because I didn’t have my Oyster travelcard.

When I was stopped there were about 20 police and 20 ticket inspectors and loads of community support officers.

Where I live we see police all the time and they love to get on the bendy buses and search people. What the police are doing is making things worse.

They are not choosing the right ways to go about things because they are not 100 percent clued up about what’s going on in the streets.

So they are just making everyone angry. Police and politicians don’t know how to relate to young people – their upbringing must have been much different to ours.

They need to know that young people don’t like police and they’re not going to respond well to them. It’s a bigger problem than they know.

In Hackney carrying a knife or a weapon is not a big deal – it’s not seen as a big thing.

People have worse things going on. I was at a party where one boy got stabbed to death. It’s not even really news to anyone anymore.

But it is really scary. It’s scary when you’re walking around the area and you see a big bunch of boys and you don’t know if they’re going to attack you or whatever.

But it’s only because they don’t have anything else to do. So people find their own way to amuse themselves.

Unfortunately it’s fights and gangs. But that’s only because the government hasn’t done enough to give kids something to do. The school system is not good either – I don’t think it’s the right way to teach children.

If they are told to just sit down and be quiet then obviously they’re not enjoying themselves and they’re not going to learn anything, so they get involved in this other stuff.’

‘Last November I was asked to do some work in Bristol with young people from their schools. There were 80 of them – all black. About 20 were girls.

At the end of half an hour, only 75 percent of them had managed to write down any positive things about themselves. The next exercise was to write down the three things they feared the most.

Many wrote down many things they feared in less than three minutes. What they feared most, in rank order, were dying, being shot, being stabbed and having a loved one die.

So 80 14 to 15 year old students were preoccupied with death and dying. And then when I asked them how does your school deal with these matters, the answer was we don’t ever discuss it.

And then they began to elaborate about how some of them had to take a circuitous route home and to school because if they passed through a particular patch they were likely to be attacked.

So they sit in the classroom preoccupied with their own safety while their teachers try to connect them with maths and geography and the rest of it.

Their realities are not in any way mirrored by the reality of what they do in school from one hour to the next.

This is an indictment of British society. It is nothing to do with how the black community brings up its children.

I have lived in this place since 1964. And in 1965 as a student in Oxford I was working with the children of car workers.

They were children who had high aspirations for themselves and whose parents were very concerned about their children’s progress.

When my parents came here from Jamaica, and others like them, they were told that they had too high aspirations for their children.

So we have seen a lot of anger and hurt imploding upon itself in our communities.

But this is not because of some genetic disposition.

We had the murder of Rhys Jones in Liverpool. He was white, his assailants are also believed to be white.

And then the whole media went into a frenzy because one white boy had died – after however many black boys had been murdered on our streets.

If the government and schools spent more time dealing with those children’s spiritual, moral and cultural development and less concerned about where they stand in the league tables, those children wouldn’t be killing each other to this extent.’

Professor Gus John works with young people associated with gangs and with relatives of victims of gun violence in Manchester.

This is an abridged transcript of his contribution to a forum on gun and knife crime held at Marxism 2008. To buy a CD of the full meeting, phone Bookmarks on 020 7637 1848 » www.bookmarks.uk.com 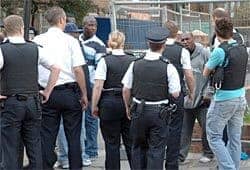 Knife crime: ‘crackdowns’ are no solution