This article is over 17 years, 5 months old
IT ISN’T just Britain that is experiencing a crisis of New Labour style politics.
By Alex Callinicos
Downloading PDF. Please wait...
Saturday 14 August 2004

IT ISN’T just Britain that is experiencing a crisis of New Labour style politics.

On the continent they talk about “social liberalism”, referring to social democratic governments that implement neo-liberal policies.

Germany is the most important continental example of social liberalism today.

Anyone who has lived through Britain’s neo-liberal experiment since Margaret Thatcher took office in May 1979 would recognise it.

In Germany the big corporations are under increasing competitive pressure from their rivals in the US and East Asia. They are demanding that Schröder push through in two years what it has taken Tory and New Labour governments in Britain a quarter of a century to implement.

This offensive is causing huge convulsions in German society. The ruling Social Democratic Party (SPD), the most powerful reformist party in the world for more than a hundred years, has been thrown into a profound crisis.

Numerous activists in the SPD and the trade unions have thrown their weight behind a new political party. Election Alternative Labour and Social Justice plans to mount a challenge to the SPD in the 2006 federal elections. The top trade union leaders are still backing Schröder. They caved in before an offensive by multinationals Siemens and Daimler-Chrysler against the 35-hour week.

Workers in these companies have been forced to accept a longer working week with no increase in pay. But pressure from below forced the union leaders to organise a day of protest in April.

This followed an initiative by the German branch of ATTAC, the campaign against international financial speculation.

Last week I attended the Summer University of ATTAC Germany in the eastern city of Dresden.

The founders of ATTAC in France have been on the moderate wing of the anti-capitalist movement. They argue that the ills of neo-liberalism can be remedied by imposing more regulation of financial markets.

The leadership of ATTAC Germany share this same outlook, but they have in practice adopted a more militant approach, campaigning against the war in Iraq and Hartz IV. It is a sign of this difference that I was invited to speak in Dresden to a packed meeting of some 400 people devoted to the theme of “Alternatives to capitalism”.

The German edition of my book An Anti-Capitalist Manifesto provided a main reference point in the discussion.

The other platform speakers—including the distinguished Marxist academics Elmar Altvater and Joachim Bischoff—were sceptical about my argument for a revolution that would establish a democratically planned economy.

But the size and enthusiasm of the audience showed the hunger for an alternative to neo-liberalism that is more than a reformed capitalism.

The real excitement in Dresden was provided by the mass protests that took place there and in other eastern German cities on Monday of last week.

It will particularly affect people in eastern Germany, where unemployment has run at horrific levels since the country was reunified in 1990.

On Monday of last week 2,000 people—out of a total population of 27,600—demonstrated against Hartz IV in the town of Senftenberg, which suffers from 30 percent unemployment. Some 150 signed up to organise more protests. Demonstrations are being planned every Monday all over eastern Germany.

This is how the revolution began against the old Stalinist East German state 15 years ago.

In Senftenberg protestors took up the slogan of the 1989 revolution, “We are the people!” 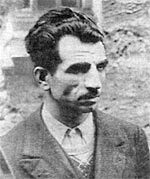 French Resistance: Did the ‘Army of Crime‘ die for France?