The bloody history of Nato’s intervention in the Balkans

This article is over 11 years, 2 months old
Many people who are horrified by what Western intervention has done in Iraq or Afghanistan still see no alternative to supporting a no-fly zone over Libya.
Downloading PDF. Please wait...
Tuesday 15 March 2011

Many people who are horrified by what Western intervention has done in Iraq or Afghanistan still see no alternative to supporting a no-fly zone over Libya.

Western governments encourage this—and point to the “successful” humanitarian intervention in Yugoslavia to back up their case.

During a recession at the end of the 1980s, various leaders in Yugoslavia attempted to head off a wave of workers’ resistance by stirring up tensions between the various ethnic groups in the country.

They managed to drag the country into a civil war and Yugoslavia dissolved into several smaller states. Television images showed civilians being shelled and strafed as they were “ethnically cleansed” from their homes.

The first combat missions in Nato’s history were part of a so-called “humanitarian intervention” to save these civilians.

The intervention was divided into two distinct phases.

The first was over Bosnia, Operation Deny Flight, between 1993 and 1995. This implemented a no-fly zone for all sides in the conflict, but was specifically targeted against Serb forces.

It pretty much halted flights by military planes—though not helicopters, which were harder to monitor. In the only air battle, US fighters shot down five Serb planes.

But nothing in this policy stopped destruction by sniper fire or artillery. The war intensified and casualties rose.

So by 1994, Nato escalated the operation to include air strikes on ground targets, particularly tanks in fighting around Gorazde and Sarajevo.

The next phase of the intervention, in 1999, began where this one finished. Britain and the US bombed Serbia for 78 days, supposedly to protect civilians in Kosovo.

More than 9,300 combat sorties hit military targets—but they also managed to bomb trains, bridges, the Chinese embassy in Belgrade and a television station.

When Western leaders talk about the “success” of the no‑fly zone policy, this is what they look to.

But this was not a “no-fly zone”. It was a display of naked imperial power, which killed many civilians.

Nevertheless, General Joseph W Ralston, vice chairman of the US Joint Chiefs of Staff, was pleased with the policy. He said in September 1999 that, “Despite the weight of bombs dropped, Serbian civilian casualties were amazingly light, estimated at less than 1,500 dead.”

Not only had the no-fly zone escalated into an active campaign of bombing, but it had failed to achieve its stated objectives.

And our leaders are less keen to recall attacks on the people who were supposedly being protected.

One notorious air strike slaughtered at least 60 people in a refugee convoy of tractors and trailers.

This was so far from the image Nato was trying to spread that its media spokesperson General Giuseppe Marani told a press conference, “When the pilot attacked the vehicles, they were military vehicles. If they then turned out to be tractors that is a different issue.”

In Serbia itself, it was a popular uprising which overthrew Serbian dictator Slobodan Milosovic—not Nato airstrikes. And the Nato action triggered the “ethnic cleansing” of Albanians in Kosovo that it was supposed to prevent.

Instead of helping the people it claimed to protect, this “humanitarian intervention” created and bolstered artificial states, allowing warlords, strongmen and gangsters to dominate. Neither did it end discrimination or oppression.

Nato had been set up during the Cold War supposedly to defend the West against aggression from the Soviet Union and the countries of the Warsaw Pact.

Now these had collapsed, but rather than dissolving itself, Nato openly revealed its role as a tool of Western imperialism.

Whatever politicians said at the time, Nato’s decision to intervene was based on its strategic interests, and specifically trying to expand its influence into areas that had been in Russia’s sphere of influence.

The expansion of Western attacks through the “war on terror” in 2001 was a direct extension of this policy, not a diversion from it.

And it continues in Libya. “Humanitarian intervention” is still a way for Western powers to get their foot in the door—and that is why they are interested in Libya, where they want to keep control of oil production.

For further reading, go to http://www.socialistreview.org.uk/article.php?articlenumber=9389

‘No-fly zone’ is no way to free Libya 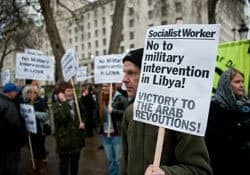 No to intervention in Libya! Victory to Arab revolutions!

Emergency protest against the bombing of Libya