The Egyptian Revolution must spread to win

When we say the Egyptian Revolution is permanent, it’s not just that it literally hasn’t stopped since 2011.

It’s that revolutions don’t happen in a vacuum. Egypt and Tunisia are well integrated into world capitalism, and the revolutions have been expressions of the crisis in that system.

We are close to some of the world’s most important sources of oil, in the Persian Gulf. Since the financial crisis in the West, the Gulf states have also been emerging as major new centres of global finance.

It is very dangerous for these countries to be surrounded by revolution. So the rulers of Saudi Arabia and the United Arab Emirates are leading the counter-revolution in the region.

When General el-Sisi took over in Egypt, his first phone call was to tell the king of Saudi Arabia not to worry. Although with 17 million people in the streets they both have a lot to worry about.

The revolution in Egypt can only succeed through the fall of these regimes. It needs to spread or it will be choked.

Capitalism does not develop in a linear way. If you take a train journey through Egypt you can see huge differences between the industrialised north and the much less developed south.

You start to see much more illiteracy and unemployment, less infrastructure and investment. That unevenness also exists in people’s consciousness, and in the militancy of their struggle.

The urban centres of the north have led the revolution. In the first wave the south and the countryside played almost no role. And these are the places where the Islamist movement has most of its support.

Egypt’s workers have been leading one of history’s biggest strike waves since 2006.

But many peasants and unemployed people, particularly in smaller towns, have not been part of that struggle and are now taking part. This explains some of the support for the army in recent protests.

It is not that workers suddenly switched to supporting the army. It is that new people have come into the streets as well, and they are only just becoming politicised.

It is also a problem that much of the left insists the Islamists are always the main enemy, and are willing to support some of the worst military crimes against them.

The question for us is how to overcome that unevenness, to unify the struggle so it can take on the state.

Our revolution has yet to defeat the generals, let alone destroy the capitalist state. That tells you how difficult that process is.

This is the key question of the Arab Spring—the question of leadership. And there is a leadership in the Egyptian Revolution. There are the same people in the front line time and time again in Tahrir Square. And there are highly politicised workers who see their strikes as part of the revolution.

Everyone knows the revolution will continue, even the generals. But they have no alternative.

General Nasser’s military regime won mass support because it offered real reforms. It had space to do that because the system was expanding.

Now there is no such space and we are having to bring down one government after another.

The revolutionary left is not yet big enough to pose the question of a real alternative, to point beyond the capitalist state. But the revolution could go on for years—and that gives us an unmissable opportunity to grow.

Sameh Naguib is a member of the Revolutionary Socialists in Egypt
Topics Egypt, Egypt in revolt, Revolution

Can't we win change through parliament?

How the West lost Libya's revolution 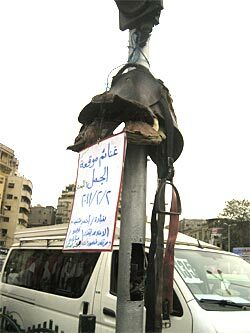