The free market vs protectionism

This article is over 13 years, 6 months old
Whatever the bosses say, they will never be on the same side as their workforce, writes Judith Orr
Downloading PDF. Please wait...
Tuesday 10 February 2009

It’s a bit rich that politicians and big business lined up to lecture us on the virtues of racial tolerance and international solidarity during the recent wildcat strikes.

One editorial in the Financial Times newspaper last week stated, “Our self interest requires us to show solidarity beyond national borders”.

Another issue carried a letter signed by nine heads of multinational companies pleading, “There is an urgency for all politicians to ensure there is no backlash against foreign workers”.

Does this represent a change of heart? Have a bunch of ruthless backstabbing profiteers suddenly discovered empathy with the plight of workers who leave their families and travel hundreds of miles just to make a living?

The answer is no. Bosses are equally happy to fleece the labour of men and women the world over whether they are from Latvia or Liverpool. But that is not the definition of being anti-racist in my book.

Gordon Brown and Peter Mandelson have joined in the preaching – portraying themselves as bulwarks against the discrimination faced by migrant workers. Yet they are part of the same government that boasts of how many immigrants it deports each year.

We must be suspicious of their claims to be defending workers. The European Union was not founded on Karl Marx’s ideal of internationalism, “Workers of the world unite – you have nothing to lose but your chains”.

Instead, as many workers know to their cost, it was established so that bosses could be free to roam in search of the cheapest labour and the maximum profits.

This is internationalism bosses’ style, commonly referred to as globalisation. The rich know no borders when it comes to making profits. But they are only too happy to use race and nationality as divisions whenever they can pit worker against worker.

They depend on the labour of migrant workers but at the same time they blame them for every ill in society.

So when Brown and Mandelson tell us we will all be doomed if we retreat from globalisation it doesn’t wash.

Globalisation, even when it was deemed successful, has brought millions of workers nothing but instability, lower wages, and longer working hours.

Millions rightly blame the global rampage of the free market for the current economic crisis and don’t want to see more of the same.

But the bleating from the free marketeers about the dangers of protectionism and the wonders of globalisation is dishonest.

Every ruling class is indulging in protectionism to try and shield itself and its interests as a national and international class from the ravages of the crisis.

What are the bailouts if not the injection of national funds into national banks or industries to hold up a national economy – potentially at the expense of another?

Every national state is playing the game and each one is fearful that another’s intervention will be more effective. For instance, those who hope to sell to the huge US market are terrified by the prospect of Barack Obama’s “Buy American” campaign taking hold in the biggest economy in the world.

We are seeing the rich and powerful both unite across borders and retreat behind them to protect their interests.

This desire to protect their interests, rather than any altruistic desire to help someone else, lies behind any intervention in the economy.

So, the International Monetary Fund only intervenes when the collapse of a national economy might have a negative affect on the big economies that call the shots.

Mandelson attacks the recent wildcat strikes for being “protectionist”, claiming that, “Britain gains from the free movement of labour”. But who is “Britain”? Is there ever a “national interest” that unites construction workers with the managing director of Shell or BT?

No. When Mandelson says that Britain gains what he actually means is that the bosses gain.

This is why the slogan “British jobs for British workers” is a dead end. It implies that everyone in Britain, regardless of class, can pull together to combat the crisis. The reality is that the rich and powerful are fighting to make us pay the price for it.

I am all for workers’ protectionism against globalisation. But that means uniting workers across the globe to defend jobs and conditions against our common enemy.

Hypocrisy and hysteria on drugs

Holocaust Day, something to fight for 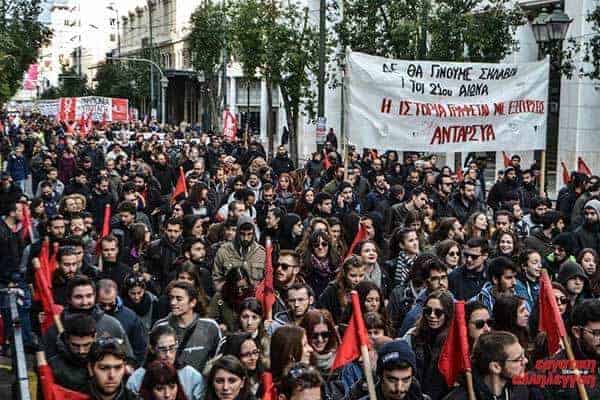