The issues at stake touch millions of lives

This article is over 16 years, 4 months old
The great success of this week’s pension strike rattled Tony Blair and his iron chancellor Gordon Brown. That’s why, hours into the action, they were forced to offer talks to the unions.
By Charlie Kimber
Downloading PDF. Please wait...
Saturday 01 April 2006

The great success of this week’s pension strike rattled Tony Blair and his iron chancellor Gordon Brown. That’s why, hours into the action, they were forced to offer talks to the unions.

We need to ensure that any deal agreed sees no worsening of conditions for present or future workers. And if the talks do not succeed, we need more action – and quickly.

That will mean every activist throwing themselves into building the regional days of action, supporting the strikes and protests planned for those days.

We need to help raise money for those sections set to be called out on longer strikes.

But the key to victory is more national action, mobilising the power seen across Britain on Tuesday.

We need a two-day national strike soon, and further escalation if necessary, ratcheting up the pressure on this weak and unpopular government.

Blair’s instincts in this dispute will be to side with the rich and powerful against those fighting back.

On the one hand he will seek a consensus with big business and the right – as he did when David Cameron’s Tories helped to pass his education bill.

On the other Blair will try to crush opposition from the trade unions and the left. This will echo the attacks on firefighters during the bitter 2002-3 dispute. Back then Blair and the Sun newspaper worked hand in hand to slander public sector workers.

This time, prime minister in waiting Brown is leading the charge. “Senior sources” close to the chancellor told the Sun, “Our commitment is to deliver savings on public sector pensions and public sector pay, and we will not back down in the face of this action.”

But behind their bluster, ministers were terrified by the scale and strength of this week’s strike. That is why they were forced to offer talks with the unions.

The stakes are high. New Labour, and business leaders such as the CBI’s Digby Jones, fear that this action can tap a wider mood among other public sector workers and across the private sector.

The British establishment united on Tuesday to argue that every public sector worker should face the same pensions assault as local government workers.

A defeat for the strikers would open the door for Labour to launch new attacks on the pensions of NHS staff, civil service workers and teachers.

So solidarity is vital. That is why the TUC should call a national demonstration during the next national strike action, and make it a focus for all workers.

This battle is also crucial for workers in the private sector. The right bleat that private sector schemes have been made much worse, so why shouldn’t the public sector go the same way?

But our argument is that we should all have decent pensions and retirement at 60, not pit groups of workers against each other in a race to the bottom.

There will be many more lies emanating from the CBI and from Downing Street in the weeks to come. They will claim that the money is not there to fund pensions.

The pensions strike has challenged the sense of pessimism and defeatism in the unions. This is not some limited, bureaucratic battle. It touches the lives of millions of workers.

This struggle requires a break from old routines and habits learnt in times of defeat, and during the long years when the unions were held together by a minority of committed individuals.

To discuss the way forward the unions should hold special meetings for reps and members at local, regional and national level. Why wait for the next scheduled branch meeting or the national union conference?

This week has seen fresh forces flood into the unions, with thousands of new members recruited – for example, 500 have joined the Unison union in Huddersfield in the last three weeks.

Nationally hundreds of new reps are coming forward. We need the participation and energy of everyone to decide the best tactics to win.

Members must also discuss and control the terms of any settlement. There must be no deal which worsens conditions for present or future workers. 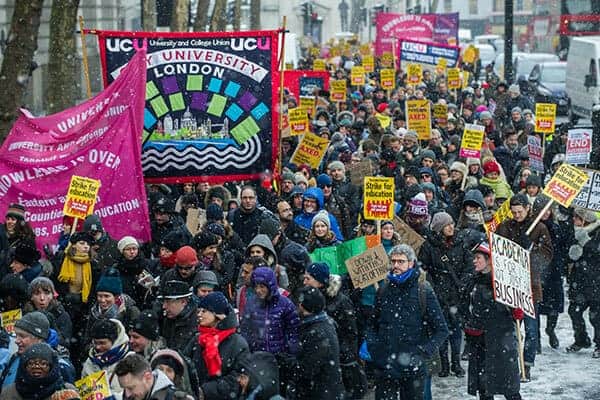 ‘Some Greek workers are continuing the fight beyond the general strikes’