The Manchester Time to Go demonstration: ‘This isn’t one to miss’

This article is over 15 years, 4 months old
The amount of money spent on communications by the government has trebled since it came to power in 1997. The biggest single increase in this astonishing figure has been at the ministry of defence.
By Lindsey German
Downloading PDF. Please wait...
Saturday 09 September 2006

The amount of money spent on communications by the government has trebled since it came to power in 1997. The biggest single increase in this astonishing figure has been at the ministry of defence.

The conclusion is simple – our money has been used by this government to sell the most unpopular series of wars in history and to convince people in Britain that Tony Blair’s craven support for George Bush will make the world a safer place.

This is nearly as great a waste of money as the war itself. It is a credit to the anti-war movement that we have conclusively won the arguments against the “war on terror” – even though we rely on public meetings and protests, while the government has access to the mass media and spin doctors.

Yet the government has repeatedly refused to bow to mass opinion throughout Britain, including in the Labour Party itself, as Blair rides from disaster to disaster.

Most recently, his refusal to call for an immediate ceasefire while Lebanon burned under Israeli bombs shocked even some of his most loyal supporters.

MPs who trooped into the government lobby over Iraq without a murmur, and who voted to send more British troops to Afghanistan found this too much to stomach. Many Labour MPs now want him to go and go fast.

A political storm is brewing over Blair’s head which will erupt at Labour’s conference in two weeks’ time.

The spinners and ministers will try to keep it off the conference agenda, as they have in recent years.

But the demonstration building for Saturday 23 September in Manchester will determine the real agenda for the conference, whatever the order paper says.

People from all over Britain are arriving in Manchester by road, rail, foot, bicycle and horse. Trade unionists, students, pensioners, Muslims, Christians, Jews and atheists will all be there.

It will be a demonstration of a different type. Labour conferences held in seaside resorts have always attracted demonstrations, but never on the scale that we will be able to mobilise in a major city like Manchester.

The big centres of population in Yorkshire and Lancashire are just short journeys away. They have to turn out thousands from each town and city to make this a mass mobilisation on a scale which will bring Manchester to a halt and force the withdrawal of troops from Iraq and Afghanistan.

Right up to the last minute, leaflets, posters and street meetings can attract new people to the protest.

A special responsibility lies with London. Our demonstrations have attracted mass mobilisations of Londoners to protest at foreign policy. With its huge population even last minute activity helps a good turnout.

This time Londoners have to do what people from Manchester and the rest of the north of England have had to do to support London demos – get up early to catch a train or coach.

Organising for this can’t be left to the last minute. It needs to be done now. Every London Stop the War group should have organised transport and be selling tickets for coaches and the special train.

Most groups are holding public meetings in the next week. They should become organising centres for Manchester, sending out teams of people to poster and leaflet stations, mosques, colleges, schools and workplaces.

Nearly every major union is actively and enthusiastically supporting this demonstration, which means we can get record numbers of trade unionists, from Aberdeen to Plymouth.

The next week is critical in building the march, especially in London.

Every socialist should work all-out to make 23 September a mass exodus of protesters from London.

Lindsey German is national convenor of the Stop the War Coalition. She writes here in a personal capacity. 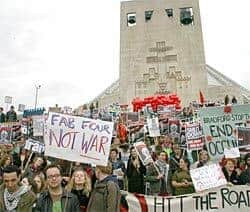 All roads lead to the Manchester demonstration, 23 September