The US army is weak and afraid

Last week Ryan Crocker, former US ambassador to Afghanistan, was a guest on a US public radio programme. He said the occupation had to stay to help the Afghan security forces grow strong enough to stop Al Qaida coming back.

The first caller to the show was a working class Southerner. He said the ambassador was full of bullshit. His son was serving in Afghanistan and had told him that once the US troops left in 2014, whoever the people thought hated the Americans most would take control.

The second caller was smoother, more polite, perhaps an officer. He had done seven tours in Afghanistan, most recently in Kunar province. He said politics in Kunar was complicated, with many factions fighting each other. The only thing all the factions agreed on was hating the Americans.

Why do you think you have a different view from the ambassador? the moderator asked. The caller thought the words “on the ground” were relevant.

These conversations show a key reality. All Afghans, and all American forces, now know the occupation will be over in 2014. Some 69 percent of Americans already think the US shouldn’t be in Afghanistan.

President Barack Obama has promised to leave, and Republican challenger Mitt Romney does not mention the word. Americans have had enough.

Moreover, the result of a withdrawal in 2012 or 2014 will be the same. So US troops know they are fighting for nothing and most Afghans don’t want them.

They also know they might die any day. This explains the Pentagon’s panic over the 51 Nato troops killed so far this year in “insider attacks” by Afghan soldiers and police.

These are not suicide bombers, and most are not “Taliban infiltrators”. They are Afghans who take offence at bullying, or hate the occupation.

On a world scale, 51 is not a large number of dead. But the Pentagon has come under enormous pressure from American troops to do something. The Afghan soldiers and police symbolise for US soldiers all that is wrong with their mission.

These are the people they are supposed to support and train—the whole point of their remaining mission. And the killings show how much Afghans hate them.

The Pentagon’s first reaction was to order US guards with weapons at all joint missions and training. This was mad. Pretty soon it would lead to frightened US soldiers firing first, and unit battles between Afghans and Nato.

So last week the Pentagon ordered all US units to stop patrolling with, or training, Afghan forces without authorisation from a senior general—on the end of a phone, who would take time to say no.

But US troops have been bulldozing their own bases all over the country as Obama’s “surge” in troop numbers leaves. The Afghan army has relied on quick US army and helicopter support, because the Americans will not give them helicopters, artillery and working vehicles.

That support was winding down—now it has disappeared. In effect, there is now an occupying force of 100,000 soldiers who can hold their bases, but not occupy anything. It says to every Afghan that the Americans are weak, afraid, and leaving. That in turn emboldens the Taliban.

And it leaves “humanitarian” and other Western “civilians” without protection. It concentrates the mind of every Afghan politician on the future. And it will probably be impossible to leave special forces, trainers, diplomats or civilians behind when the occupation ends.

The British generals were enraged about the decision to stop working with Afghans. The Americans had not consulted them, and the decision was a decisive military defeat.

The Pentagon is now saying the measure is only temporary, while Afghans are upset about the Muslim-hating film. Maybe, maybe not. We don’t know, because they are still arguing in Washington. But the Pentagon panic is a sign of the pressure the generals are under from below.

That pressure will accelerate, as the date of withdrawal comes closer, more troops leave, and an emboldened resistance closes the ring around the remaining bases.

The media and Afghanistan 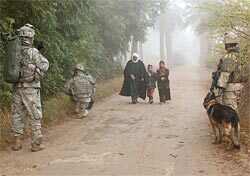 Will bombing liberate women in Afghanistan?