‘We were like second-class citizens, we were just easy bloody pickings’

This article is over 9 years, 0 months old
Jimmy Savile knew that his victims in state institutions would find it hard to stand up to him.
Downloading PDF. Please wait...
Tuesday 15 January 2013

Jimmy Savile knew that his victims in state institutions would find it hard to stand up to him.

They said, “When you think where most of us had come from, we were just easy bloody pickings; we were vulnerable and all we wanted was attention because we did not get it off our families.

“Whatever people did to us was OK because we had no self-esteem, we were like second-class citizens. We were always being told we were in care because we were bad.”

More than once the CPS said there was “insufficient evidence to take any further action”.

In Jersey an investigation into an allegation of indecent assault at Haut de la Garenne children’s home during the 1970s was also dropped as it was decided that there was “insufficient evidence to proceed”.

The report points out that Savile initially denied visiting the children’s home.

But he “later admitted that he had following the publication of a photograph showing him at the home surrounded by children”.

The police disclosed they did not tell any victim that they were looking into other complaints.

One crime reports states, “obtain statement from Ms E tomorrow and Ms C Tuesday but not make each other aware of other allegations”.

Several victims told the police that they would give evidence if other women came forward.

Levitt writes of one victim, “She could remember saying to DC S

on that final occasion in June 2008 that ‘if you can find me other people I might change my mind [about giving evidence]’.”

These revelations give some insight into how this friend of Tory Margaret Thatcher was able to carry out abuse across Britain for five decades.

But they are not the end of the story.

There are still many questions unanswered.

What sort of society treats some of its most vulnerable young people in state institutions as if their lives have no value?

How can the police claim that things are different now?

Officers in the specialist Sapphire unit set up to investigate sex crimes have recently been charged with falsifying records.

That meant that allegations of rape and abuse were not properly investigated.

Politicians have responded to the Savile abuse revelations with much handwringing.

But none of this addresses the roots of the problem of child abuse.

Nor does it address the extent the ruling class will go to in order to protect one of their own—whatever horrendous crimes they are committing. 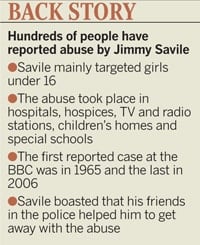 How police helped to hide abuse by Jimmy Savile