When the trivial is significant

This article is over 17 years, 9 months old
AS I'M sure Socialist Worker readers are aware, there has been only one story of importance in the British press over the last few weeks. The fighting has intensified, the partnership is weakening, and the situation is rapidly deteriorating. Yes, of course, it is the highly significant story of the relationship between Posh and Becks.
By Patrick Ward
Downloading PDF. Please wait...
Saturday 17 April 2004

AS I’M sure Socialist Worker readers are aware, there has been only one story of importance in the British press over the last few weeks. The fighting has intensified, the partnership is weakening, and the situation is rapidly deteriorating. Yes, of course, it is the highly significant story of the relationship between Posh and Becks.

In a week in which the US and its allies have had to admit losing control of sections of occupied Iraq amid days of fierce and bloody fighting, the British media have employed yet another weapon of mass distraction. They want to plaster over the terrible events that have resulted from the war which the majority of the media wholeheartedly support. Unsurprisingly, it is Murdoch’s News of the World that is most excited about this turn of events. After all, would you admit that this “easily winnable” and “totally justifiable” war was being dragged further into a Vietnam-style disaster?

Or would you prefer people not to know about it, and instead concentrate on something completely irrelevant? This week’s News of the World website only contains news on the Posh and Becks “story”. Celebrity is not, as the tabloids often claim, just something they report on due to the demands of the readership. The entire concept of celebrity exists purely as a means of control. In a time when traditional icons such as the royal family are about as popular as anthrax, other idols are required to enforce the concept of social hierarchy.

The people of importance are figures such as David Beckham, Princess Diana and Elizabeth Hurley. Unless you are as rich, successful and beautiful as they are, then you are somehow less of a person than they are. It serves to perpetuate the myth that if we try hard enough, we can be just like the Beckhams or Hugh Grant (or whoever else happens to be flavour of the month). Until then we should shut up and be grateful for what we have.

After all, who needs ordinary folk like us who only serve to work at the checkouts, sweep the road and nurse the sick when we have such important people in society as Jennifer Lopez? Inevitably, however, these superstars fall from favour and do something “human”. When this happens, the ravenous media have to be on the scene to capitalise fully on their downfall.

Or Rupert Murdoch? His worship of the dollar led him to propose to the Chinese authorities that he would not mention the Tiananmen Square massacre so long as he was handed a large chunk of the country’s media. I must have missed that edition of the Sun. Strange how these stories of “human failing” never seem to make it to the front pages, isn’t it?

‘Economic spring’ is a long way off 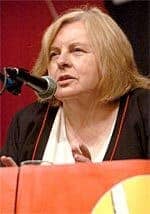