Where is Lula’s Brazil going?

Brazil is Latin America’s largest and most economically powerful nation.

On the surface it is a success story – President Lula of the Workers Party still enjoys substantial popularity within Brazil. The economy has been relatively stable and it is likely that Lula will choose his own successor in the next presidential elections in 2010.

But to see where Brazil is really going, we need to look beyond the slick public relations of the government.

While a growing world market for Brazil’s ample agricultural products has guaranteed a degree of stability there has been very little actual economic development. Economic growth for 2008 is estimated to be just 5.3 percent – behind 13 other Latin American countries.

There have been some modest improvements in income distribution and the creation of more formal (but poorly paid) jobs. However, these reforms pale in comparison to the bonanza the rich in Brazil have reaped under the Lula government.

Petrobras, the state petroleum producer and refiner, surpassed Microsoft this year as the third largest corporation in the Americas. Brazilian banks have broken consecutive records in profits.

Last year saw a 46 percent rise in the number of Brazilians with more than $1 million invested in shares. This is in a country in which a third of the population lives below the poverty line.

Lula has embarked on several large-scale projects such as a series of hydroelectric dams. Local people who have organised militant protests against the environmental and economic impact of these works have been slandered and sidelined.

The ministry of the environment has handed out licences for these destructive projects. This is why the popular environmental minister, Marina Silva – a comrade of the great workers’ leader in the Amazon, Chico Mendes – was finally forced to resign in May in protest at the pro-business strategy of the Lula government.

Lula has gained an international reputation as a proponent of the production of biodiesel as an alternative to fossil fuels. Yet the Movement of Landless Rural Workers (MST) and environmental groups have provoked a great debate in Brazil about the dangers of massive sugarcane plantations.

It is likely that such plantations will further displace small and medium-scale producers in favour of the huge national and multinational agribusinesses that already dominate Brazilian agriculture. Activists are also concerned that biodiesel production will use land desperately needed for the production of food.

Lula has played a delicate balancing act internationally. He has refrained from open criticism of the US. Knowing that his base supports the left-leaning governments of Hugo Chavez in Venezuela and Evo Morales in Bolivia, Lula has maintained a moderate stance – not joining in with imperialist criticisms, but keeping a distance from the movements in these countries.

Yet Brazil’s intervention in Haiti effectively puts the lie to Lula’s neutrality. Since 2004 Brazil has maintained over 1,000 troops as part of the supposed peace-keeping mission in Haiti.

The mission has been a failure and Brazilian troops have been involved in brutal repression of protests in order to pave the way for the installation of a business-friendly pro-US regime.

Brazil’s role in Haiti has shamed the anti-imperialist origins of the Workers’ Party. Opposition until now, however, has failed to generalise the dissatisfaction felt by many Brazilians.

The Party of Socialism and Freedom (PSOL) continues to attract attention, but party activists have struggled to maintain PSOL’s base in concrete struggles to stop it becoming just become a left-leaning parliamentary splinter group.

The tasks for the left and social movements are clear – to continue to expose the flaws in Lula’s strategy, build local struggles and generalise these into a united opposition, and work within PSOL to build a political alternative. 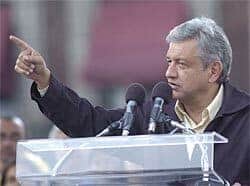 Oaxaca need not burn in solitude

What will happen if Hugo Chavez goes?